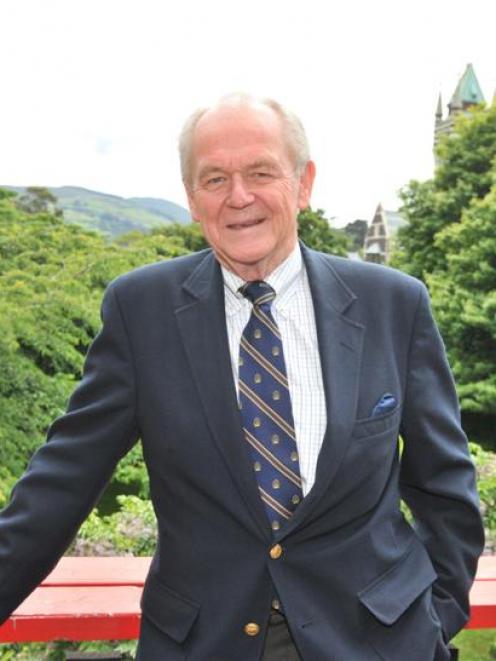 Sir Murray Brennan, who has received a knighthood for his services to medicine. Photo by Linda Robertson.
Ask Prof Murray Brennan about an esteemed medical career that has now been honoured with a knighthood and luck is a recurring theme.

A University of Otago graduate and a surgeon and researcher based in New York, the 74-year-old's clinical trials have produced major findings in the management of patients with soft-tissue sarcomas and pancreatic cancer.

He has helped create the world's largest database of sarcoma patients and developed a computer program that will help doctors predict patients' response to treatments and chances of surviving.

Sir Murray has been recognised for his life's work with one of the country's most senior honours,

Grand Knight Companion of the New Zealand Order of Merit, in the New Year Honours.

The appointments are limited to a maximum of 30 living people at one time.

Sir Murray said it was ''really special'' to be recognised in the country where he began studies as an Otago medical student in the 1960s and worked as a medical registrar at Dunedin Hospital.

He was ''very grateful'' for his Otago education and said the Otago Medical School was ''one of the finest medical schools in the world''.

During his medical studies, he played rugby for Otago, as a centre, was president of the Otago University Students' Association and completed a degree in mathematics.

In 1997, he received an honorary doctor of science degree from Otago University.

Sir Murray founded an Otago University alumni association in the United States about 10 years ago, which has since raised about $2million for the university.

He has also raised funds for medical research by New Zealanders in their country and the US.

Sir Murray's work has been underpinned by his decision long ago to study mathematics as well as medicine at the University of Otago.

''It turned out to be a very fortuitous decision because much of what I've done has been related to applying statistics and mathematics to medicine, which in the early '70s was a most unusual thing,'' Sir Murray said.

''Now it's very common and there's a whole field called evidence-based medicine. But I had just a lucky break - a culmination of two interests that proved to be very fortuitous ... It turned out to be remarkably good for me.''

More fortune came when his application for a Rhodes Scholarship to the University of Oxford, England, was unsuccessful.

While he was a well-rounded candidate - playing representative rugby for Otago alongside future All Blacks including Chris Laidlaw - Sir Murray said his grades meant the rejection was appropriate.

The ''consolation prize'' was a three-month Chancellor's Scholarship trip to the United States - which proved life-changing.

''I realised that, gee, for what I wanted to do the US was probably a better choice than the UK. But for that, I may well have certainly done something very different.''

Sir Murray has lived in the US since 1970. He was chairman of the surgery department at the Memorial Sloan-Kettering Cancer Centre in New York - the world's oldest and largest specialist cancer institution - for 21 years until 2006.

Still living stateside and helping oversee international programmes at Sloan-Kettering, Sir Murray and his wife Susan are holidaying at their Gibbston house, near Queenstown. Sir Murray's eldest child, Sean Brennan, grew up in the US but is now an award-winning winemaker at Gibbston.

Sir Murray's honours citation states that he has been instrumental in raising funds and creating opportunities for medical research by New Zealanders, both here and in the US.

He has authored or co-authored more than 1000 publications in his field, and served on the editorial boards of 30 specialist journals, including the Australian and New Zealand Journal of Surgery since 1985.

Sir Murray and his colleagues' development of a computer program based on patient data, called a nomogram, may create better treatment plans so that patients at greatest risk of recurrence can be treated more aggressively.

In his earlier career, the application of statistics to medical outcomes had raised eyebrows as it could challenge what people had done for many years.

Cancer research was experiencing an ''incredibly exciting time'', and many cancers would be able to be treated as non-lethal chronic diseases, Sir Murray said.

''It will all be knowledge-based - because we'll understand which tumour will respond to which drug, which person will get a cancer.

''It has taken a long time for people to understand that cancer is not one but probably a thousand diseases ... I would say that the idea of a magic bullet does not exist.''