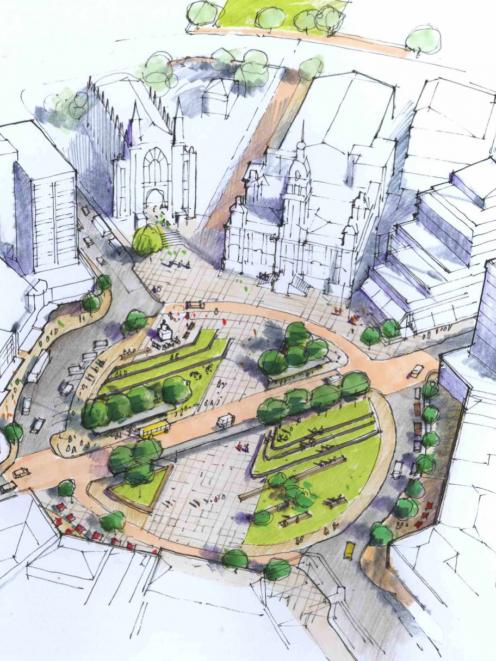 Ideas like this 2011 concept for the redevelopment of Dunedin's Octagon were up for debate again at last night's Dunedin City Council CBD planning workshop. Image supplied.
Visions of a redeveloped Octagon, a more pedestrian-friendly George St and a buzzing network of free buses took centre stage at a Dunedin City Council workshop last night.

The ideas flowed as about 45 people gathered at the Dunedin Public Art Gallery for a second night to share their views on the future of the city's central business district.

The session began with consultant urban designer Kobus Mentz suggesting something like an earlier concept of a redeveloped Octagon - first prepared in 2011 - might well merit being considered again.

The vision included a new pedestrian area running diagonally through the Octagon from the Municipal Chambers to the Regent Theatre, with green space either side.

There would also be greater use of shared spaces - creating more room for outdoor areas and forcing cars to slow down - in already-busy parts of the Octagon, including outside the Regent.

The plan was not a proposal, and would need to be reconsidered by the council and implemented over time, but ''may be able to happen'', he suggested.

Some of those at last night's event also suggested changes to George St, ranging from a more shared space - adjusting the balance between cars and pedestrians - to complete, car-free pedestrianisation.

However, the changes needed to be carefully considered to avoid choking the city's traffic arteries, which could ''really kill'' pedestrianised areas.

One suggestion was to focus more on the city's laneways, by developing and linking them together, while another envisaged Harrop St as a new home for outdoor cafes.

Others wanted to see one or more inner-city bus hubs, perhaps even serviced by a network of free, ratepayer-funded buses, to shift the city's focus away from private cars.

A more radical idea proposed imposing a blanket 30kmh speed limit across the central city, with all road markings, signs and other aids removed, while motorists and pedestrians were encouraged to share the roads.

Mr Mentz said the idea was gaining traction overseas, and in some parts of Auckland, because it removed any sense of entitlement to a street and forced everyone to ''become humans again''.

The ideas session - which was open to the general public - followed an earlier workshop on Wednesday night, aimed at inner-city retailers and property owners, which heard calls for parking and retailers to be protected.

The council wanted early public input on the future of the CBD to help co-ordinate a range of planning efforts already under way, as well as to help shape decisions at next year's long-term plan budget hearings.