Carol Thomas has a runway obsession.

The Chicago retiree has travelled across the world to Dunedin to run down the airport runway.

She arrived in New Zealand for the first time yesterday, to take part in the Run the Runway event at the Dunedin Airport this Sunday.

Ms Thomas stumbled across her first runway running event in 2015, after her chiropractor recommended she run more. 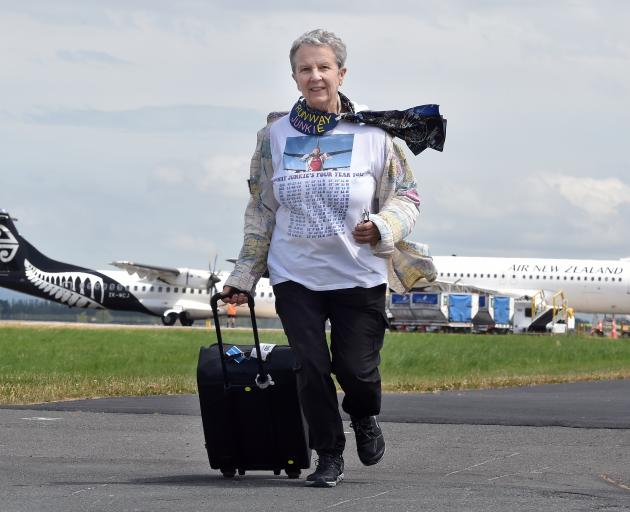 Travelling the world and running one runway at a time is retiree Carol Thomas, of Schaumburg, Chicago. Photo: Stephen Jaquiery
‘‘About two weeks after that I was in a store and came across a poster that said Run the O’Hare, advertising running down their runway.’’

Having worked at the American Airlines counter at Chicago’s O’Hare International Airport for more than 40 years, she decided to take part in a run down its tarmac.

‘‘That started it all. From there I started researching and taking part in other runs all over the world.’’

Her work travel benefits assisted her to travel to events in Scotland, Hungary, England and across the US.

‘‘Running down JFK would have to been my most thrilling run — planes were landing right over our heads.’’

The Inverness Airport Midnight Run in Scotland took place in the middle of the night to avoid an active runway.

‘‘I love that you don’t have to look down while you run. It’s a nice surface of smooth tarmac.

In October, she would run the charity World Airline Road Race with 1000 airline industry professionals in Honolulu, Hawaii.

Ms Thomas said Dunedin had so far reminded her of Ireland, ‘‘beautiful but more hilly’’.

She would be here for the next week, and would take part in the Dunedin Botanic Garden park run.