Saliva test developed in Dunedin quick and simple to use

By Riley Kennedy
0 Comments
In a back office in Princes St, Dunedin, a simple tool is being developed that could play a big part in the battle against Covid-19.

With help from funding from the United States Government, MicroGEM has developed a simple-to-use and fast saliva Covid-19 test called Spitfire6830 and it could be ready for the market within weeks.

Discussions are already under way with MicroGEM, University of Otago and district health boards about introducing it in New Zealand.

Users of the mobile test spit into a specially designed plastic receptacle which is then inserted into a box resembling a computer monitor and processed within 25 minutes. Usually, Covid-19 tests take two to three days. 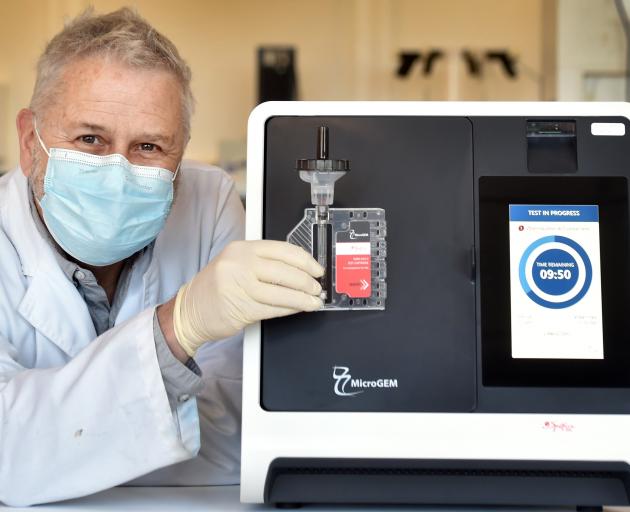 "Because it's just a simple saliva test, you're just spitting into a cup. By the time you've had your muffin and your coffee in the lounge in the airport, you've got a result in the end of it."

The research and development of Spitfire6830 was completed in the company’s Dunedin lab, with manufacturing completed overseas.

The machine was originally being developed as a diagnostic unit for testing patients for organ rejection, but the pandemic created an opportunity for the company to do something more.

Last year, the US National Institute of Health (NIH) called for businesses to apply for funding to build a system like Spitfire6830. About $115million has been invested in the project so far, half coming from the NIH and the rest from individual investors.

MicroGEM’s New Zealand branch is part of global group with offices in the US, China and a head office in England.

The New Zealand branch was based in Hamilton but moved to Dunedin in 2019, to be closer to the University of Otago.

Spitfire6830 has been analytically and clinically validated and is awaiting approval from the US Food and Drug Administration under its emergency use authorisation.

Dr Saul said once that happened, it could be rolled out within weeks.

He estimated MicroGEM’s manufacturing sites overseas could make up to 840,000 kits a week.

Dunedin-based Animation Research owner Sir Ian Taylor has offered to be a guinea pig for the device, using it alongside several other technologies, to test himself while travelling between Dunedin and the US, to show it could stop him bringing Covid-19 back with him.

In an open letter sent to Prime Minister Jacinda Ardern yesterday, Sir Ian said he hoped the level of fast testing would demonstrate how it might be possible to reduce the length of self-managed isolation to a matter of days.

"I can complete this trial, in full view of the public, in three weeks.

"The process can then be reviewed to explore how we expand it to cover other organisations, like sports teams, film crews, government officials, politicians and others who are currently taking up valuable MIQ spots that should be prioritised to get people home who have been stuck overseas for months, without the resources that groups like those mentioned can, and should, bring.

"This could be a huge game changer for the amount of time people have to spend in MIQ."