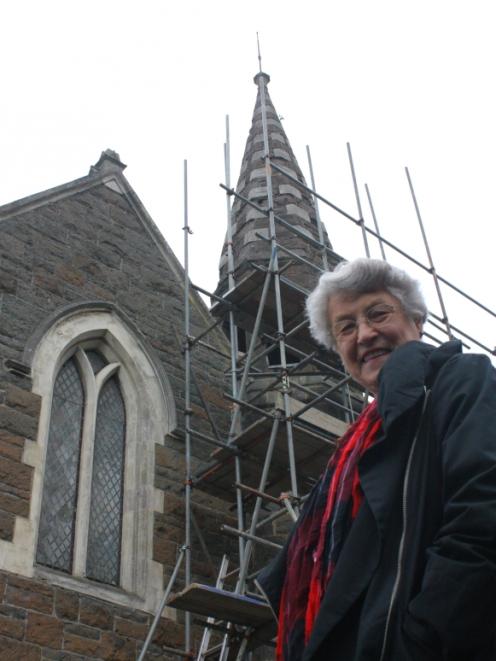 Historic Iona Church Restoration Trust member Mary Inglis inspects the scaffolding that is now being put around the church's spire. Photo by Tim Miller
After years of waiting, work is finally ready to start on the restoration of the Iona Church in Port Chalmers.

The restoration of the Historic Places Trust category 1 building has been planned for more than five years, during which time plans have been changed to incorporate factors such as earthquake strengthening.

In the next week scaffolding will be put up around the main bell tower and a smaller bell tower so a stone mason and architect can get a closer look at what needs to be done.

Historic Iona Church Restoration Trust trustee Lincoln Coe said it would be good to finally tell those who had given money to the restoration that their money would be spent.

''I think for a while some of them were starting to ask if their money would ever be used.''

Relief was one word to describe how the trust was feeling now work was about to start, Mr Coe said.

About $850,000 had been raised but the same amount again would need to be raised to complete the restoration, he said.

Initial work would make sure the church was weather-proof and up to earthquake standards.

Iona Church parishioner and trust member Mary Inglis said she was happy work was starting after years of being put off.

''It's all down to people like Margaret Innes and others on the trust who have worked so hard for all this time to get it going.''

''We are really lucky with the calibre of people we have had working on this,'' she said.