Something special about physio facility 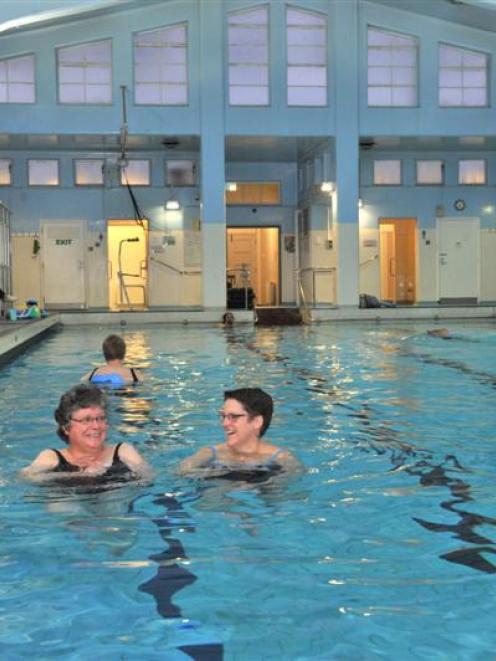 Physio pool users Barbara Bucke (left) and Angela Melrose aqua-jogging in the physio pool this week. Photo by Linda Robertson
The swims that transformed paraplegic Jim Duncan's life after a devastating cycling crash will end if the physio pool closes in December.

Mr Duncan (66) has no memory of his bike leaving Highcliff Rd in February 2012. The crash left him paralysed from the nipples down.

After nearly five months in hospital in Christchurch, the once fit and active Mr Duncan returned home a ''shell of his former self'', wife Sue Duncan says.

With the help of physiotherapist Mark Shirley, over 18 months he worked up to 40 lengths of the pool freestyle.

The swimming built his fitness to a level where he takes part in fun run events in his wheelchair. He can also go cycling in a special hand-bike, and enjoys weekend rides with his son-in-law.

''I never would have been able to do that type of exercise aerobically without the benefit of my swimming.

''I can't say enough, really. Aerobically it helps in everything I do, every day,'' Mr Duncan said.

It took a long time to get his flotation set-up right, which was ''definitely'' only possible at the physio pool. Moana Pool is not suited to Mr Duncan's needs, partly because he is prone to hypothermia.

In contrast, the physio pool warms his body right through, especially useful in the chilly Dunedin winter.

Closing the pool would be unfair and short-sighted, he said.

''It's going to be used more and more with the population ageing.''

The cash-strapped Southern District Health Board plans to close the pool in December.

It is now up to city leaders and pool users to find a way to save the therapeutic and historic facility.

For Dunedin woman Barbara Bucke (68), the pool alleviated back problems caused by her many years as a nurse.

She has swum in the pool for two decades, her nursing career having pre-dated modern lifting equipment. Everybody was accepted at the pool: ''It's a place where everybody's equal''. 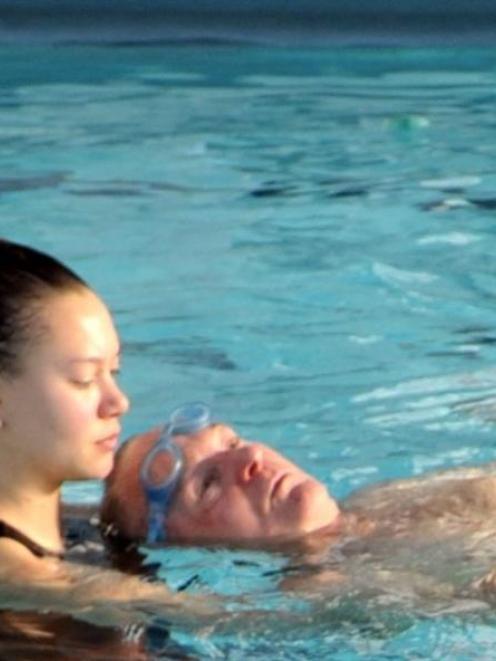 Physiotherapy student Jess Chicksen assists paraplegic Jim Duncan, who was swimming with his wife Sue Duncan. Another physio client, Judy Oats, is on the right. Photo by Gregor Richardson
Because of the pool she had more flexibility, less pain, and virtually ''lived'' in the water after disc removal surgery several years ago.

Equally passionate about the pool is Mrs Bucke's friend Judith Reader, who has swum there off and on since 1969.

A subsequent surgical procedure seriously damaged a nerve affecting the hand and arm. The arm could seize up if it was not kept moving.

''[The pool's] kept my arm mobile to the extent that it is.

''What I think of [the closure] you wouldn't print.

''The Moana Pool is no good to me because the water's too cold,'' Ms Reader said.

The city loses more than a rehabilitation and health facility if the pool closes, as the Mason and Wales designed building is part of Dunedin's architectural and medical heritage.

That it is still used for its original therapeutic purpose keeps alive the shift the pool represents towards exercise-based therapy in the middle of the last century.

Architectural historian Michael Findlay, a professional practice fellow at the University of Otago, says in keeping with its purpose the pool has a plain exterior, but a rather beautiful and elegant interior.

The designers saved something special for the inside, an exposed concrete truss carrying the weight of the roof that spans the structure in a single sweep.

''The pool doesn't look anything particularly flash from the outside, because it was never intended to. It was a utility building.''

He is following the debate over the pool's future closely, and has some sympathy with the board's financial plight.

If it could not be kept open as a pool, the building's heritage values could be retained if it was converted to another purpose, Mr Findlay said.