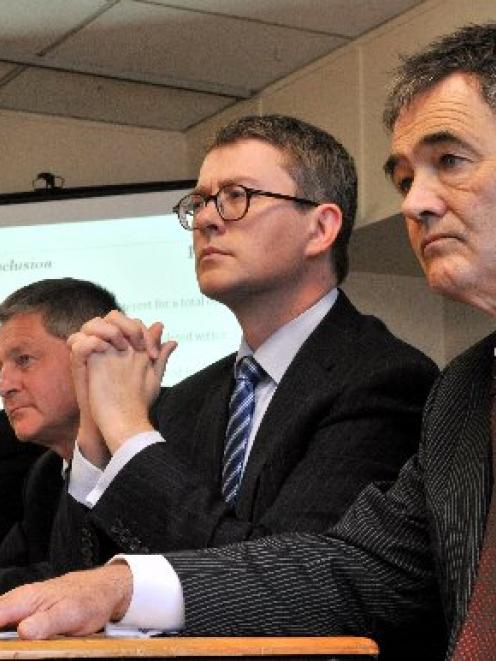 Results of the PricewaterhouseCoopers review were released yesterday and confirmed an $8.4 million overspending in stadium project costs, which lifted the price tag from $198 million to $206.5 million.

Another $3.7 million more than budgeted had been spent on the stadium's catering fitting-out, without formal council approval.

The council's costs had also not included $18 million of interest accrued during the construction period, despite being obliged to, as the interest was considered part of the stadium's construction costs.

Mr Drain told reporters there was no suggestion of criminal behaviour, but responsibility for sign-off on the unauthorised spending lay with the council's executive management.

It was not his role to apportion blame for the overspending, but information compiled by the PWC team had been passed to Mr Orders to consider.

Mr Orders, pressed on whether heads would roll, said he needed time to review the findings "coolly and calmly".

The results capped a fortnight of big news for the stadium, beginning with last week's announcement David Davies - the chief executive of Dunedin Venues Management Ltd, which runs the facility - planned to resign.

That was followed by this week's news DVML had posted a $1.9 million loss for the first six months of the 2011-12 financial year, to be followed by millions more in forecast losses over the next three years.

Speaking yesterday, Mr Cull told reporters he was pleased to have had an "honest, transparent, upfront" review showing the final stadium bill.

However, the $8 million overspending was a "considerable" sum that would place more pressure on council budgets.

"Any overrun has to be paid for and it will only increase the challenge for council in the upcoming [long-term plan budget meetings] discussions."

The overspending would have to be covered by a new loan, Mr Orders said, adding to the council's overall debt position.

Earlier, Mr Drain said the extra spending amounted to 4.2% of total costs, which was not an "enormous" percentage for a project of the stadium's size, but some aspects of the overspend could - and should - have been anticipated.

He criticised aspects of the project, including "unnecessarily complicated" stadium papers presented to councillors, which failed to clearly report the full cost, how it would be paid, or operating forecasts needed to determine the level of ratepayer contributions.

There had been a "significant" focus on the stadium's guaranteed maximum price (GMP), to ensure construction costs were contained, but other spending had not been subjected to the same scrutiny, he said.

The council should have made a "stronger contribution" to the project's management, including development costs, he said.

The council had also failed to agree specific details of all aspects of the project with the University of Otago before construction, or to involve eventual operator DVML soon enough, and there was a lack of transparency around administration costs.

Among the unexpected costs, the PWC investigation found the final cost of the stadium's catering fitting-out totalled $6.1 million.

That was $3.7 million more than budgeted, even after the council approved additional funding of $2.4 million last year, following DVML concerns the original design was not adequate.

The $3.7 million overspending was not formally approved by the council, and could not be covered, as initially hoped, by stadium budget contingencies, Mr Drain said.

Administration costs relating to the project had also blown out by nearly $2 million, rising from $3.7 million to $5.4 million, he said.

The partnership with the university had also cost the council $1.9 million more than expected, largely due to an increase in the cost of the University Plaza from $1.2 million to $4.1 million following design changes.

The council had also not budgeted for construction of a shared wall between the University's Plaza building and the stadium, but ended up paying half of the $1.8 million cost.

The PWC report concluded the stadium's base build had been completed within the guaranteed maximum price.

But Mr Drain said extra spending - totalling $1.9 million - was needed for items "ultimately outside of the GMP" to complete the stadium to the council's requirements.

Mr Cull, pressed on whether the stadium could still be considered to have been delivered on budget, said it was "clearly slightly over budget by $1.9 million".

The press conference was watched from the back of the room by Carisbrook Stadium Trust chairman Malcolm Farry.

A report on the findings of the PWC review will be considered by councillors at Monday's full council meeting.

Mr Farry later said the additional costs from the catering fitting-out and the plaza construction had been wholly the result of decisions by the DCC, university, and DVML - CST believed the original plans were adequate - and did not fit within the budget of the GMP, which could not be changed to include them.

The trust had been "extremely responsible" in managing its budget, Mr Farry said.

"We could have had large blowouts in construction for example, but we worked very hard to meet the GMP, which the PWC report agrees we did, and which was actually quite a remarkable effort."

The extra administrative costs from CST were incurred after the DCC gave the operation of the stadium, including CST's administrative budget, to DVML in the middle of the project.

This left CST, which was still managing the construction of the stadium, without an administrative budget.

The DCC agreed it would continue to pay legitimate and reasonable administration costs to CST, although no budget was ever defined despite attempts by CST to get something in writing from the DCC, Mr Farry said.