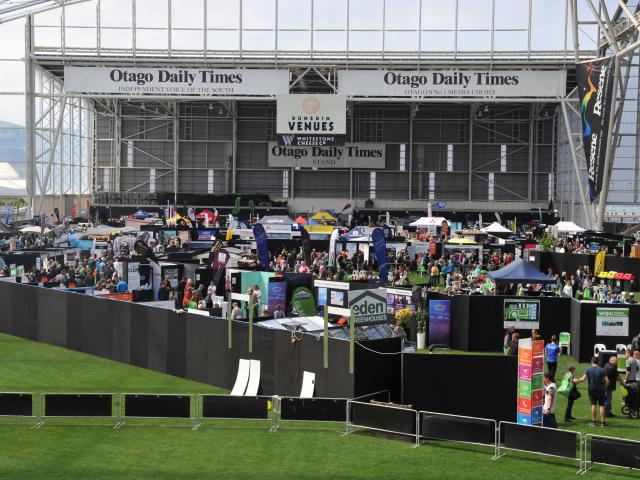 Dunedin's city council-owned venues have experienced a 20% rise in conference and events business in the last year, attracting higher-spending visitors to the city.

Mike Davies has transformed the wicket block from an ankle-deep quagmire to eight strips of lovingly manicured grass.

Event promoters would be ''stupid'' to ignore Forsyth Barr Stadium's success in hosting Fleetwood Mac when deciding whether to bring more big acts to the stadium.

A new board being recruited to oversee Forsyth Barr Stadium's physical requirements could also advise the Dunedin City Council on its $89 million investment property portfolio, it has been suggested.
For the first time in the 46-year history of the Otago Secondary Schools Music Festival, entry to this year's event will be free.

Iron Maiden fans might be disappointed, but Dunedin's legion of hard rock lovers can take heart.

A fix to Forsyth Barr Stadium's troublesome public address system could be on the way.

The news Dunedin will host seven of the matches in the 2015 Fifa Under-20 World Cup is fantastic for football and sporting fans alike - and a timely boost for the city.

Terry Davies has managed what once appeared just a dim possibility - he has brought musicians to Forsyth Barr Stadium that pull in the punters and provide a sell-out show, and looks set to be building momentum for the future. But who is this recent addition to the Dunedin ratepayer base?

Dunedin Venues Management Ltd has apologised for a ticketing mix-up which resulted in an Alexandra couple barely being able to see Rod Stewart.

Dunedin Venues Management Ltd's new chairwoman says she is up for the challenge of Forsyth Barr Stadium.

Forsyth Barr Stadium officials are looking to solve the venue's sound problems after confirming ticket sales for major concerts are being restricted as a short-term fix.

Changes to the way Forsyth Barr Stadium is run will allow it to push for bigger acts, the outgoing chairman of the company which runs the facility says.

The crystal ball was broken when the Dunedin City Council decided to build Forsyth Barr Stadium, but it is too late for a refund.

The man in charge of Dunedin's Forsyth Barr Stadium says he has ''bigger fish to fry'' than worry about whether Wellington will add a roof to its stadium.

Independent auditors have given a former Forsyth Barr Stadium manager the all clear following claims of inappropriate spending, but the company running the venue has not escaped unscathed.

Dunedin Venues Management Ltd is to underwrite next month's top-tier football clash between English Premier League team Newcastle United and Sydney FC at Forsyth Barr Stadium, it has been confirmed.

The Kiwis are coming back to Dunedin - after 86 years - and it is hoped the test will be a sellout.