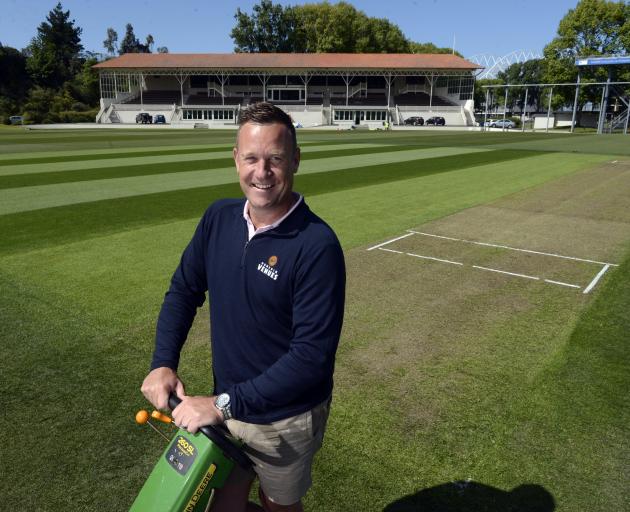 Mud no more . . . DVML head of turf and development Mike Davies admires his handiwork at the UniversityOval yesterday. PHOTO: GERARD O’BRIEN
Mike Davies has transformed the wicket block from an ankle-deep quagmire to eight strips of lovingly manicured grass.

Just four months ago, the centre of the University Oval was in such a state the venue was considered too boggy to host premier rugby.

The club semifinals had to be shifted to Hancock Park, and concerns were raised the pitch block may not be ready in time for Otago’s opening home Plunket Shield match against Central Districts today.

Those concerns turned out to be misplaced but only because of a spell of good weather and plenty of hard work.

Davies, who is the head of turf and development at Dunedin Venues Management Limited, acknowledged the wicket block was in ‘‘particularly bad shape’’.

‘‘It is a dual-purpose ground and we know what we are in for, basically,’’ he said.

‘‘At the end of winter that is when we use our skills and experience to work with what we are left with to get it back to what we’ve currently got now.’’

It has taken a ‘‘truckload’’ of work to get the pitch block and playing surface in such pristine condition. Davies and his staff also had a bit more time to prepare the venue with Otago playing its first three Plunket Shield matches away from home.

A wet spring and an earlier home game would have presented the team with a challenging deadline.

Davies was able to produce some pitches with good pace and bounce last summer but this season he is aiming to produce pitches which suit both slow and fast bowlers.

To achieve that, the grass is left thicker and longer in the middle of the pitch where the seamers typically pitch the ball, and it is thinned and cut shorter at the ends where the slower bowlers hope to land their deliveries.