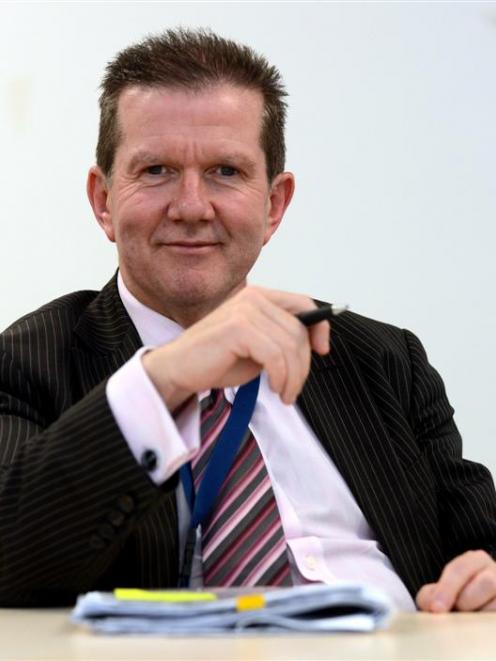 Dunedin Venues Management Ltd chief executive Terry Davies. Photo by Peter McIntosh.
Terry Davies has managed what once appeared just a dim possibility - he has brought musicians to Forsyth Barr Stadium that pull in the punters and provide a sell-out show, and looks set to be building momentum for the future. But who is this recent addition to the Dunedin ratepayer base?

David Loughrey meets a working-class boy from London with the gift of the gab and what looks a safe pair of hands for Dunedin's difficult child.

Terry Davies' life story comes in something of a flood, punctuated by self-deprecating moments and lashings of gesticulation, all held together by an unshakeable optimism and self-confidence.

Behind the occasional concern - ''I'm going to bore you to death here'' - as he describes his sporting career, comes evident pride in his ability as a salesman and an apparently unshakeable confidence Dunedin's roofed stadium is an asset, and Otago a market he can sell to.

Confidence, clearly, is something a man who once captained a Sydney cricket team that contained Steve and Mark Waugh - nine international players all up - needs, and has.

And he has had it since school days.

''I remember my old geography teacher saying 'you're going to be bloody useless','' he says.

Mr Davies did indeed became a professional cricketer- a wicketkeeper.

He met his geography teacher one day while playing at Trent Bridge Cricket Ground, and told him: ''I remember you telling me that, you bastard''.

The anecdote is told part-jokingly, but Mr Davies is a wicketkeeper in the traditional stereotype of the role: diminutive, yappy and persistent.

The self-described ''working-class boy from England'' was born in St Albans, Hertfordshire, about 30km north of central London, in 1960.

''My father was Welsh, postwar parents, not too aspirational on children's university or career, but great family home, brothers and sisters...''

he says in his shorthand speech and London accent coloured by three decades in Australia, ''I'd always been a bit different; I'd always wanted to get out of the village.''

Sport was the road that led to the wider world.

''I was a pretty good sportsman as a young bloke - pretty good, not great - so I played a bit of cricket and a little bit of soccer; football.

''A bit'', and ''pretty good'' mean playing for his county, Hertfordshire, in football and cricket.

That included periods ''on trial'' with the West Ham, Luton Town and Tottenham football clubs.

Mr Davies began playing for the Glamorgan County Cricket Club - and played 100 first-class matches all up - spending the off-season in Australia, coaching and playing for Bankstown.

He met his wife Noelle, Sydney-born, in London and studied at the University of Wollongong, before deciding it was time he had a ''real job''.

His entry to the world of sales was less from any grand ambition, than a very practical need.

''I needed a car, you shouldn't put this in, but this is the real reason, I said `I need a car'; so I got a rep's job with a multinational, Pacific Dunlop.''

Mr Davies quite literally started his career very close to the bottom, selling women's underwear for the Bonds brand.

But he moved quickly through the ranks of Pacific Dunlop ''because I was getting good results''.

He was dealing with major customers such as Woolworths and Franklins within eight months.

''I found out what my skill set was.

''I was very good at understanding what the customer needed, understanding the dynamics of the individual customers, engaging internally to make sure stock got out on time.

''I think I was just a natural salesman.''

After a career at Pacific Dunlop, which included introducing house brands to the Target chain, developing a zero return into $12 million in the first year, Mr Davies' sporting background helped him land a job at Adelaide Oval in 1995.

That job, as general manager of commercial operations, was something of a worthwhile training ground for his later move to Dunedin.

The South Australian ground was then a ''not dissimilar model to here''.

''Twelve months in, we delivered a $1.5 million surplus. That was consistent right up until I left.''

That turnaround came from a review of what was being done, and understanding what the core business was.

Membership packages were restructured, and corporate experiences enhanced ''so we got more money out of them when they came, increasing yield''.

''It was about showing there was incredible value in your asset.''

After a term at Etihad Stadium in Melbourne, and a tourism position back in Adelaide, the role of Dunedin Venues Management Ltd chief executive came up.

''I delved in. What it reminded me of, and what I was good at, was getting into a business that had been underperforming, and then resurrect it.

''I saw all the same traits: disconnect with the community; bad vibes about the brand; underperforming in terms of revenue streams - all of the same common themes of the businesses I'd gone in and turned around.

After that was worked through, it was time to engage with the market, though not before some pain.

Issues dealt with included how to get production gear to the city.

That meant talking to Air New Zealand, Dunedin International Airport and cargo companies to come up with solutions.

Promoters were looking at an $800,000 cost for bringing 24 semi-trailers to the city.

''We said 'we sort of know our market - there is a well-heeled top end; it is an older demographic; let's put in some content that we think will be successful'.

''Rod's [Stewart] proven you can sell; Neil [Diamond] and Fleetwood [Mac] are all the genre that fits that demographic.

With the recent successes the stadium has seen, Mr Davies is confident momentum is building.

''I know now for a fact that [the] New Zealand Rugby [Union] rate this place as the No 1 stadium to play at in New Zealand.

''No-one's ever talked about that.

Not only has Mr Davies found a home at the stadium, he has bought a home in St Clair, doing his own bit as a ratepayer to pay for the facility in which he works.

And he likes - no, loves - plenty of aspects of his new home.

''The people are great. I love living on the water. I love the changing seasons here; I love the landscape; I love working in this business here.