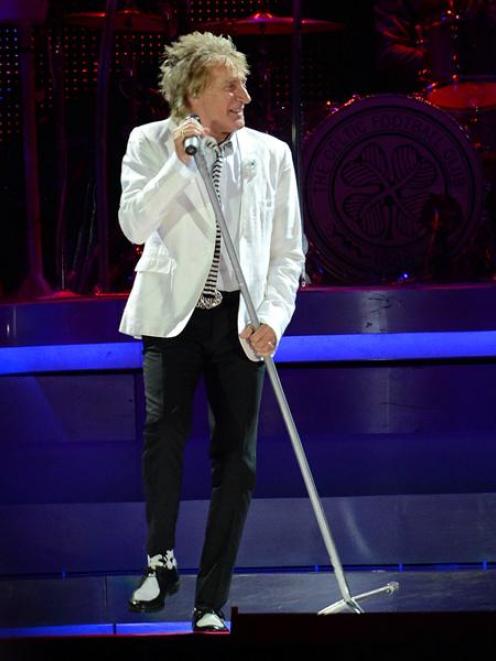 79% of more than 2700 concert-goers were satisfied with the sound at Rod Stewart's Dunedin concert. Photo ODT
Four ticket holders unhappy with the sound at the Rod Stewart concert at Forsyth Barr Stadium in April have been given a partial refund by the concert's promoter.

One of the concert-goers, an Auckland man who asked that his name not be used, said the four received $500 from Frontier Touring after filing a Disputes Tribunal claim.

He sent the Otago Daily Times an email from a chartered accountant representing the company, offering the refund as a ''full and final settlement in this disputed matter''.

The email said the company regretted ''that you had such an unfortunate experience''. Frontier Touring would not confirm the payment, saying it could not disclose information on individuals.

But DVML marketing and communications manager Kim Barnes said 79% of more than 2700 concert-goers who completed a survey had either been satisfied or very satisfied with the sound.

The stadium was working with production companies to solve any problems.

The Auckland man told the Otago Daily Times he and his friends paid ''top dollar for inadequate seats adjacent to the stage - but a long way from it''.

The sound for the opening act was fine, but for Rod Stewart was ''the major issue, constantly fading in and out''.

He was initially told he should have complained to venue staff and asked for a better seat, which it emerged after the concert some people had done.

DVML has said after the concert there were some complaints about the quality of sound in parts of the Speight's stand.

The man said it was ''ludicrous'' to have to ask for a better seat once the concert was under way.

''The point was that we paid $180 plus each - a total of $755, from memory - for seats which purported to be in an excellent position.

After filing a Disputes Tribunal claim, the man said, he got an email offering 50% of the ticket price as a refund.

The man responded he would only accept $500, and that was ''instantly accepted''.

He said that showed the parties involved were aware of problems with the sound.

''If everyone who was annoyed at their shabby treatment that night took their case to the tribunal, Dunedin might find its great stadium suddenly becomes a better concert venue.

''No one expects concert hall sound at a vast stadium. But the decent sound for the opening act showed that passable quality is quite possible.''

Frontier Touring's New Zealand based national publicity and promotions manager Maria Robinson was asked if it was standard practice to offer refunds, if others had asked for refunds, and if Frontier Touring had concerns about the stadium as a venue.

Ms Robinson would only respond the Rod Stewart concert was widely considered to be a highly successful event, with more than 22,000 fans attending.

''Frontier Touring are unable, however, to disclose information concerning any individual persons attending our concerts or events.''

Ms Barnes said each concert was different, and there was a situation where one person may complain of bad sound but three seats away others had no problems.

The sound set up was up to the production team for each concert.

Things could change depending on layout, a change of seat placement, a change of numbers, or high winds - ''it's anyone's guess really''.

''We're making promoters aware of all the information we have on the venue. But ... every production is going to be different.''

The venue would allow people to move if they were not happy with sound where they were.

''We always ask people if they have any issues with their seat, let us know at the time. We always have plenty of ushering staff around the place.''

Ms Barnes said in a post concert survey with responses from 2746 ticket holders, 79% said the sound was ''satisfactory'' or ''very satisfactory''.