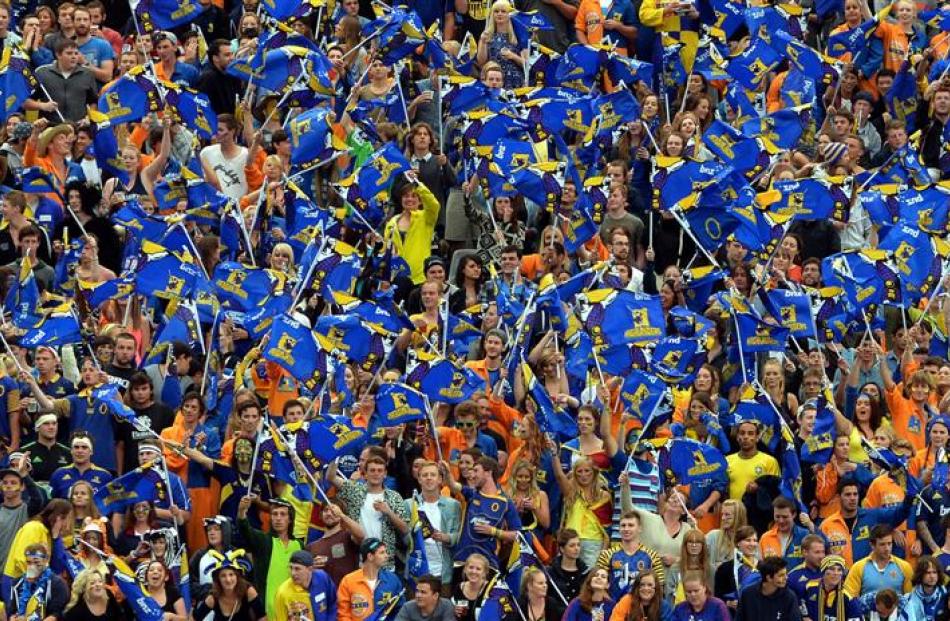 Jubilant Otago University students pack ''The Zoo'' at Forsyth Barr Stadium on Saturday night for the Highlanders' Super 15 clash with the Blues.

Promise little, deliver much - perhaps the Highlanders have got it the right way round this season.

It was back to being plucky underdogs on Saturday for the Highlanders, and they responded with a 29-21 win over the Blues at Forsyth Barr Stadium.

One win will never define a season, but this was what you might call a cleanser for the beleaguered southern franchise.

The Highlanders' epic collapse last season left some ghosts to be banished, and Saturday's display was a decent first step towards their exorcism.

After they raced to a 24-0 lead in the first half , there was an inevitable comeback from the Blues, desperate to prove all the pre-season hype about them was more than hot air.

But it was the Highlanders' night, and they wore broad smiles as they retained the Gordon Hunter Memorial Trophy.

Now, two questions remain: Can the Highlanders repeat their winning effort against the Chiefs in Hamilton this week? And will a first-up win lead to a bigger crowd for their next home game?

Even boosted by students during Orientation Week, Saturday's crowd could not break 16,000.

Hopes of a bumper double-header for the stadium were dashed yesterday when the pre-season rugby league match between the Warriors and the Broncos attracted fewer than 6000 fans.

More than 15,000 attended the same fixture a year ago, but the time-slot and the loss of the novelty factor clearly had an impact on the gate.