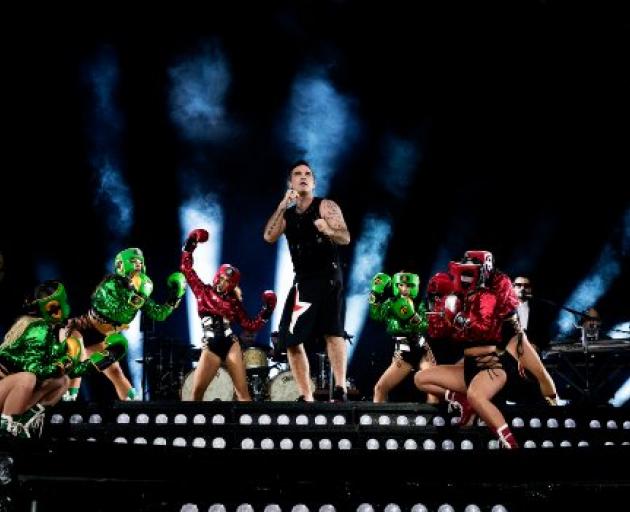 Robbie Williams in concert. PHOTO: SUPPLIED
Dunedin’s accommodation sector is set to be besieged by a triple whammy of events on one February weekend.

Thousands of students and their parents and hundreds of pipers hit town on the same weekend that British pop superstar Robbie Williams is due in the city.

Dunedin Host chairman Deane Agnew said the concert — which could attract up to 35,000 people —  was on the same weekend many parents of University of Otago students dropped their children off for the new university year.

The parents stretched accommodation services, something that would be exacerbated by the weekend events. It was announced last week Williams would bring his Heavy Entertainment Show World Tour to Forsyth Barr Stadium on Saturday, February 17.

The next day is Octagonal Day, featuring a pipe band contest that will attract hundreds of pipers from  throughout the South Island to the centre of the city.

However, both Mr Agnew and Ms van de Vlierd said the city would find a way to deal with the influx.

Mr Agnew said people going to big events in Auckland, for instance, would think nothing of driving for an hour to get to a venue, so if some had to stay in Balclutha or Oamaru it was not a bad thing.

‘‘It’s a perception/reality issue more than anything.’’

Mr Agnew said the city was usually close to full on the  weekend when students and parents arrived.

Parents arrived and spent the weekend with not just first-year students, but also second- and third-years to set them up in flats or halls of residence.

International students’ parents stayed for ‘‘considerably longer’’ than  the weekend.

Accommodation providers further from the central city would ‘‘absolutely benefit’’.

‘‘That’s a great thing for the city, and those accommodation providers,’’ and meant towns such as Balclutha and Oamaru would be busy.

‘‘February tends to be the busiest month for the tourism industry round the South Island.’’But she said the city would manage.

‘‘We just have to accommodate it. It’s surprising how things can be sorted out.‘‘We’ve had events on in February before and we’ve managed.

Ms van de Vlierd said it would be harder on the weekend of the concert for tourists who had not booked their accommodation beforehand, but they would be more flexible about ‘‘going further out’’.

Robbie Williams fans were more likely to have booked, as tickets went on sale this week, so it was more likely to be later arrivals who might be ‘‘sent on to the next town’’.

The weather should be good, so camping was also an option.

‘‘A lot of Robbie Williams fans would be happy to have a tent in a camping ground.‘‘It’s fantastic they’re coming. We’ll deal with them.

A 5 star hotel is not the answer. The existing larger hotels in the city are already screwing the public on big weekends when they know there will be high demand. It is not unusual to see them double prices and insist on a minimum 2 night stay.