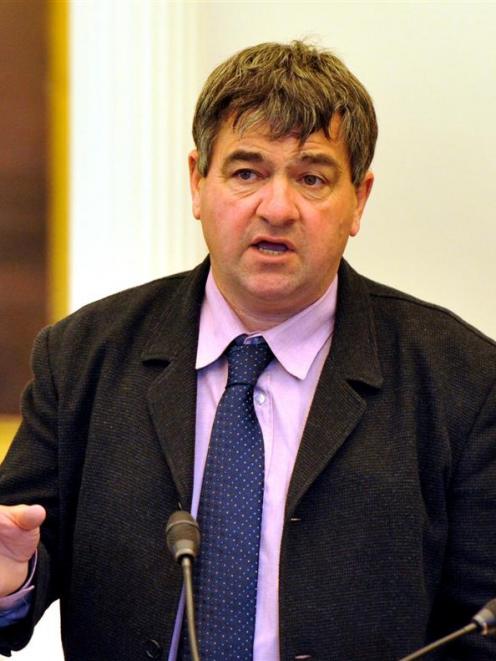 Cr Mike Lord says the DCC must consider asset sales to offset the stadium burden. Photo by Gregor Richardson.
The crystal ball was broken when the Dunedin City Council decided to build Forsyth Barr Stadium, but it is too late for a refund.

That was the message from Dunedin deputy mayor Chris Staynes at yesterday's council meeting, as councillors voted to grant another $1.81 million a year to the troubled venue.

The 14-1 decision, subject to public consultation next year, came after more than an hour of hand-wringing, finger-pointing and defiance.

Most councillors supported council chief executive Dr Sue Bidrose's stadium review, with many reiterating that like it or not, the city had the stadium and its bills, and needed to make the most of it.

That included Cr Staynes, although he voiced concerns yesterday about the quality of financial information presented ahead of the decision to build the stadium in 2009.

If councillors knew then what they did now, the ''clear decision'' would probably have gone against building the stadium, he said.

''The crystal ball that was used at the time clearly should have been returned under warranty. It was way out.

"What we suffer now was the fact that promises were made ... with information which was far from what turned out to be reality.''

Cr Staynes voted against the stadium in 2009, but said it was here to stay and the city needed to ''get over'' the debate.

''We need to be positive as a community about this facility. The past is the past,'' he said.

That did not sway Cr Lee Vandervis, who opposed the review's recommendations and insisted the document was ''a publicly-funded bureaucrats' answer to what are serious business problems''.

The review had concluded demolishing the stadium would add about $3.760 million to ratepayers' costs and leave the debt to be paid.

But Cr Vandervis said a simpler option had been ignored - locking the gates and opening it only when needed, helped by volunteers.

The council also needed to admit it was subsidising the stadium in a variety of ways, from a $400,000 events attraction fund to a $5.25 million reduced dividend to cover stadium debts, he said.

''The problem is we keep throwing new kinds of funding at the stadium, and we keep calling them different names, disguising the fact they are all subsidies.''

Cr Mike Lord said nobody was denying the stadium was being subsidised, but he was happy to pay the extra cost.

The council now had no choice but to consider asset sales to help offset the burden, he believed.

Cr Andrew Whiley said the ''world class'' stadium should be supported, but stadium loans could be extended again, from 18.5 years to 28.5 years, to help ease the burden.

Cr Kate Wilson said she was ''very sorry'' to be considering the extra stadium funding, but supported Dr Bidrose's work, while Cr Richard Thomson said the focus should be on ''maximising the value'' of the venue.

Cr Neville Peat said the stadium was in ''a league of its own'' in its financial state and potential, and the council needed to make it work, while Cr Hilary Calvert said the stadium's use and its debt were now ''completely separate''.

Cr Andrew Noone conceded the council had taken on too much at once when it built the stadium, on top of other major capital projects, but ''if that's our only fault, we can look back on setting up the city for the future''.

Dunedin Mayor Dave Cull said ratepayers were always going to pay for the stadium ''one way or another'', but the review offered ''the best way'' forward.

''For me, this is a great improvement.''

The debate came after a report, released last week, recommended reviewing the rent Dunedin Venues Management Ltd (DVML) paid to service stadium debts, amid suggestions it could be halved to $2 million.

Another $30 million of stadium debt should be transferred to the council, and DVML and Dunedin Venues Ltd's governance arrangements should be overhauled, with DVL's directors replaced, it said.

The council also needed to start funding for stadium renewals, with $51 million needed over the next two decades, but it should also end a $1.44 million annual subsidy to DVML.

Together, the changes would help DVML turn a small profit but also lift the ratepayers' stadium bill by $1.81 million a year, to $11.65 million a year.

The council also had to find nearly $1 million on top to plug a budget shortfall projected for 2014-15.

Dr Bidrose said yesterday most of the increased spending would cover stadium debt and interest, with only about $1.7 million a year subsidising stadium operational costs and renewals.

That compared favourably with the sums given to other council facilities, including Moana Pool ($4.16 million a year), the Dunedin Public Art Gallery ($3.8 million) and Dunedin Public Libraries ($9.58 million), she said.

Cr Jinty MacTavish said the stadium could be more like Moana Pool if it was more accessible for community use.

She won support from all councillors after suggesting DVML should report back to the council when it felt an artificial turf was an option for the stadium.

That could also avoid the need for the council to invest in artificial playing surfaces in other parts of the city, she said.

Yesterday's decisions would form part of consultation on next year's council long-term plan.