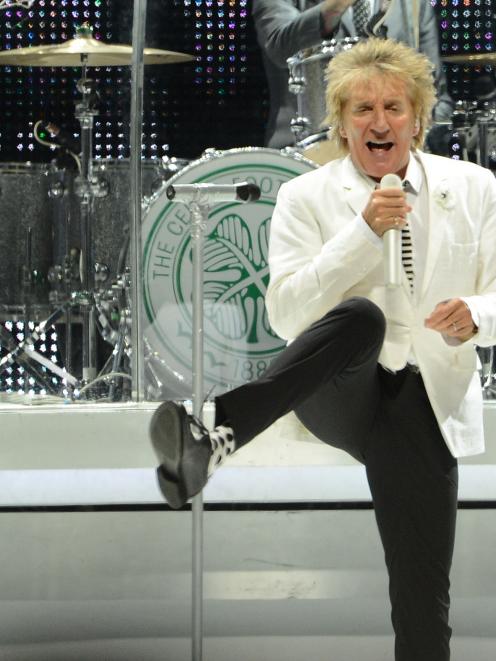 Rod Stewart. Photo by Craig Baxter
Dunedin Venues Management Ltd has apologised for a ticketing mix-up which resulted in an Alexandra couple barely being able to see Rod Stewart.

Sue Harris said their experience was ''terrible'' after they came to Forsyth Barr Stadium on Saturday expecting tickets halfway down the pitch, only to be moved to the Mitre 10 stand following 45 minutes of confusion with different staff telling them different things.

The couple were not the only ones affected by the mix-up. A group sitting next to them in the Mitre 10 stand were in the same boat.

When she bought the tickets over the phone in September, the person on the other end specifically told her she was getting pitch tickets.

Ms Harris was still glad she went to the concert, but wanted some acknowledgement from the organisers they had ''stuffed up'' and hoped they could learn from it.

One positive was that the sound was very good, even though they could barely see Stewart.

''We can't say we have `seen' Rod Stewart - he was just a little `blip' moving across the stage.''

DVML spokeswoman Kim Barnes said it was sorry for the mix-up.

''We had a situation where there was an error on the tickets printed, whereby some general admission tickets were printed with rows on them,'' Ms Barnes said.

Ticket holders were notified about the error last week and she was unsure why Ms Harris did not receive the correspondence.

''It's all part of our event debrief, so we certainly appreciate any feedback.''