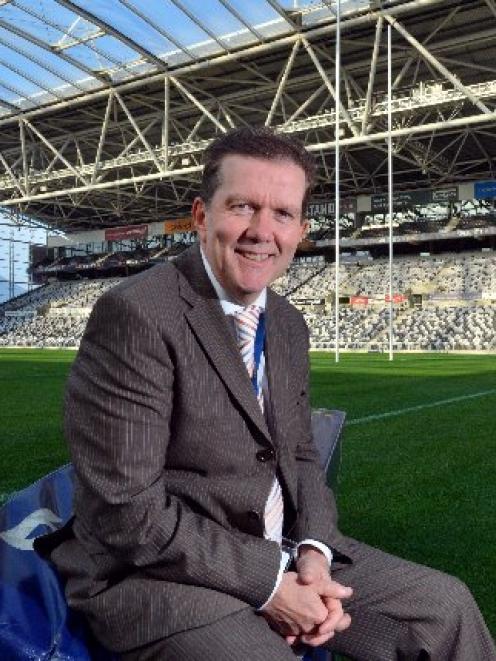 Mr Davies is the company's third chief executive in less than two years, following David Davies and Darren Burden, and arrives as DVML faces predicted losses totalling $3.8 million over the next three years.

However, Mr Davies yesterday told the Otago Daily Times he aimed to lift DVML's performance, including by breathing new life into staff ''smashed'' by years of public criticism.

He would also sharpen the company's commercial focus and encourage the community to be proud of their stadium, in part by targeting more big concerts and creating new ''iconic'' events for the venue.

That work had already begun and DVML staff were negotiating a possible ''A-grade'' concert for the roofed venue, Mr Davies said.

He would not be drawn on details, but said the concert - if confirmed - would be bigger than Sir Elton John's 2011 sellout show.

''I'm talking about a performer, or an act, that will sell out within three hours. It's an international act.''

And, despite past criticism of the stadium as a concert venue, Mr Davies still saw a future for the roofed venue hosting major acts.

It was ''realistic'' to hope to attract at least one A-grade concert every year or two, while, at the next level down, he planned to target more performers of the calibre of Sir Elton or Neil Diamond.

''We can get them and we'd be aiming at getting as many of those shows as we can.''

He also welcomed the Dunedin City Council's stadium review, launched earlier this year, but said DVML's finances would remain challenging as long as it had to pay $4 million in rent each year to service stadium debts.

Unless ''common sense'' prevailed, he expected DVML's ''best scenario'' would be a break-even result.

His comments came after Mr Davies was confirmed as Mr Burden's replacement last month, beating 45 other candidates to secure an open-ended contract worth up to $225,000 a year.

And, after the departure of two DVML chief executives in quick succession, Mr Davies said he would be in no rush to leave Dunedin.

He planned to buy a house once his wife - and possibly one of his three adult children - joined him in the city in a few months.

''I'm committed to stay as long as the board want me here and as long as I think there's a challenge here.''

Mr Davies had moved to Dunedin from Australia, where he settled in 1986 after a career as a professional cricketer at the Glamorgan County Cricket Club in Wales.

In Australia, he joined the Pacific Dunlop Group clothing company, working for Bonds, before a 15-year stint with the South Australian Cricket Association, which ran the Adelaide Oval.

He was the association's marketing, memberships and commercial operations manager, as well as its deputy chief executive, as the ground built a reputation for hosting major events, including AC/DC, Pearl Jam and Fleetwood Mac concerts and Ashes cricket tests.

In 2010, he transferred to Etihad Stadium, in Melbourne, for a year-long stint as its commercial operations general manager, responsible for venue membership clubs, corporate hospitality and sponsorships.

He became the South Australian Tourism Commission's event strategy manager in 2011, overseeing a strategic plan for events and their commercialisation, before taking ''time out'' to help his children launch a retail business.

Mr Davies said he was looking for a chance to move back into venue management when the Dunedin opportunity emerged.

He was encouraged by the idea of tapping into a ''parochial'' region that would rally around big events, and the chance to make improvements.

''What I like about here is we're a bit underdone. I think there's an opportunity to do a couple of things.''

He was aware of the stadium's rocky history - ''everyone's been beaten around the head by it'' - but wanted to encourage the community to be proud of the venue.

He also hoped to meet long-time stadium critic Bev Butler as part of a push to be more open and transparent.

DVML was responsible for a suite of venues including Dunedin's town hall, which Mr Davies said was an ''unbelievable'' asset that was underutilised but had ''phenomenal'' potential for growth.

He hoped Dunedin could follow Adelaide's lead in creating festival-style events, particularly with a large student population on the stadium's doorstep.

Initial ideas included a festival of concerts around Orientation Week, partnerships with the likes of the fashion industry, or creating new events that could grow, he said.

''We'd love to build some iconic events ... whatever that is, it's an in-your-diary event that's at Forsyth Barr [Stadium].''