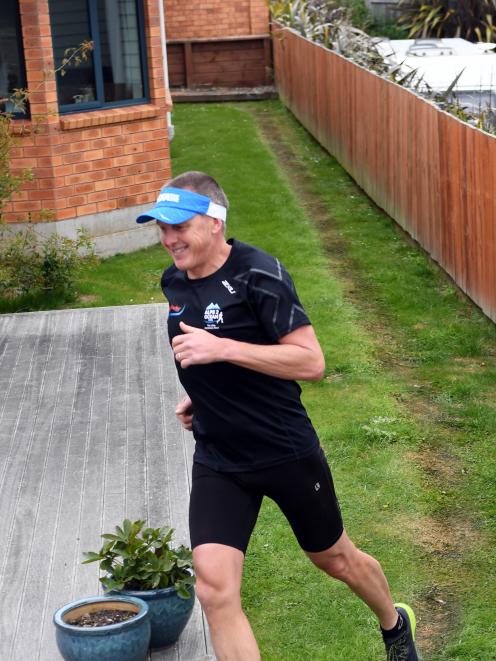 The mental challenge was the biggest barrier for Glenn Sutton to overcome as he ran a marathon by doing laps around his Dunedin house yesterday. PHOTO: STEPHEN JAQUIERY
It is the strangest marathon Glenn Sutton has ever done.

In a bid to beat the lockdown boredom, the Dunedin ultra trail runner ran 610 laps — the equivalent of a marathon — around the outside of his Waverley house yesterday .

He came up with the idea on Thursday night while chatting to his family.

They initially agreed to run some laps with him.

‘‘I never saw them, they never came out.

‘‘But they’re quite used to these crazy ideas I come up with.’’

Each lap of his house was about 70 metres. The whole run took him about five hours, which was much slower than the roughly three hours a marathon would usually take him.

Every hour he would switch directions, ‘‘just to mix it up a wee bit’’.

‘‘Our house is fairly square so there were corners to go round, and a couple of steps and a bit of grass and a bit of tile, so I had all sorts of terrain.’’

There was a cold beer waiting for him at the end.

After completing the marathon on day two of the four-week lockdown period, he had some firm ideas about how the next few weeks would play out.

‘‘I’m not running around the house again, that’s for sure.’’