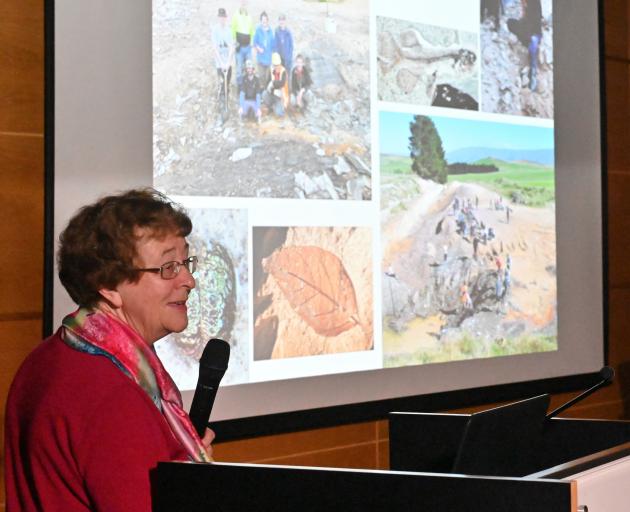 University of Otago palaeontologist Associate Prof Daphne Lee speaks about the value of Foulden Maar during a public talk at Otago Museum last night. Photos: Linda Robertson
A public meeting in Dunedin has thrown its weight behind a bid to protect the Foulden Maar near Middlemarch.

More than 120 people were at the Hutton Theatre, at Otago Museum, last night to listen to Associate Prof Daphne Lee explain the significance of the site as a fossil and climate change record.

Afterwards, Prof Lee was joined on stage by Dunedin city councillor Aaron Hawkins, environmental lawyer Sally Gepp and campaigner Andrea Bosshard, for a panel discussion on how best to protect the area.

That prompted University of Otago emeritus professor Sir Alan Mark - who was speaking from the audience - to suggest that the Public Works Act might be used to acquire the 42ha site and any surrounding land needed.

A crowd listens to Prof Daphne Lee's presentation
He then put forward a resolution, calling on the Government to do whatever was necessary to acquire and preserve the site, which the crowd approved.

The site, described by Prof Lee as the most important terrestrial fossil site in New Zealand and a potential Unesco world heritage site, is also home to a non-operational diatomite mine owned by Plaman Resources.

The company was seeking to expand the footprint, by buying an adjacent farm, when it was placed into receivership last week.

23 million years of history here.
This is the answer: 'Otago emeritus professor Sir Alan Mark - who was speaking from the audience - to suggest that the Public Works Act might be used to acquire the 42ha site and any surrounding land needed." THAT'S HOW IMPORTANT THIS IS TO NZ on an international scale.