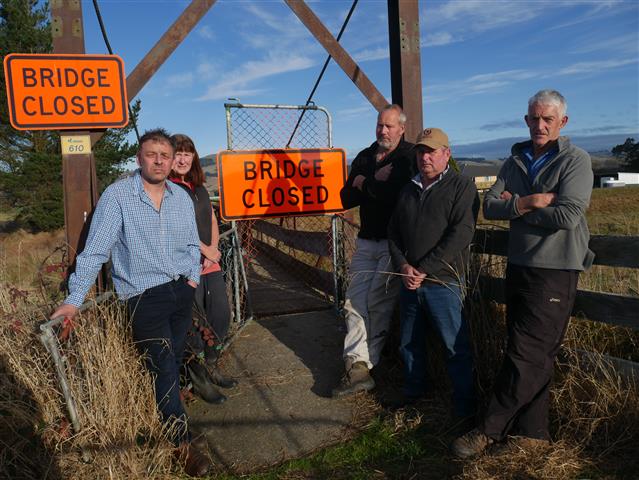 Concerned residents (from left) Mosgiel-Taieri Community Board deputy chairman Dean McAlwee, Susan Horrell, Ad Bekkers, Dale Horrell and Alex Merrilees stand at the footbridge in East Taieri, which was closed last week and is proposed to be removed. PHOTO: JESSICA WILSON
The Dunedin City Council is planning to remove an “unsafe” footbridge in East Taieri, but residents are upset about the consultation process. Jessica Wilson reports.

The proposed removal of a 60 to 70-year-old bridge, which crosses the Silver Stream beside Gladfield Rd, has come as a shock for a group of landowners who regularly use the bridge.

Dunedin City Council transport group manager Jeanine Benson said an assessment of the bridge showed its suspension rods and abutments were damaged, making it “very unsafe for public use”, and it needed to be removed.

The council had received complaints about the condition of the bridge from residents who were worried children were using it, she said.

Members of the community had been consulted.

“Council staff are happy to discuss it further, but public safety comes first.”

However, nearby farm owners said they were not consulted, which concerned Mosgiel-Taieri Community Board deputy chairman Dean McAlwee.

“We’re unsure of who they actually consulted,” Mr McAlwee said.

The first the landowners knew about the bridge being removed was when contractors were on site taking measurements in preparation to take it away, he said.

The community board was also not notified.

Mr McAlwee thought people who complained about the state of the bridge would have wanted it repaired, not removed.

It was damaged in the 2017 flooding, but had remained opened since then, he said.

“If it was that much of a safety issue it should have been removed the week after.”

The bridge was well used by the community, including families, he said.

Using the bridge was safer than crossing the Silver Stream via the road, which involved going through the water.

“It does not take much rain and then you can’t go across the road.”

He wondered what the end goal was because it would be wrong just to remove the bridge.

It was often used by farmers to move stock.

Another local farm owner, who declined to be named, said the bridge was used every day, especially during lockdown.

It did not make sense to him that the council would remove a piece of infrastructure that encouraged people to exercise and be active.

“I would have thought they would ask the community.

“If the community wants it gone, that’s fine.”

People could make their own assessments as to whether the “historic” bridge was safe enough for them to use, he said.

Ms Benson said council staff spoke with the landowner whose property the bridge is on, a community board representative and a concerned neighbour.

Options for a possible replacement would be discussed with the community board, and would depend on the availability of funding, Ms Benson said.

“The existing bridge is too low to the water, making it vulnerable to flooding, which means a like-for-like replacement is not an option.

“Ultimately, the poor condition of the bridge is a public safety issue, making the decision to close the bridge a priority for DCC staff.”