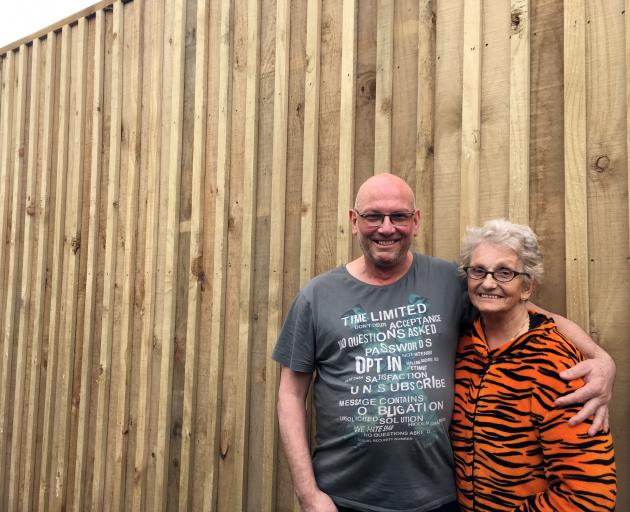 Rose Cabral and her son Peter are pleased by the lack of noise coming from the new BP station behind their property in Irvine St, Mosgiel, thanks to the installation of a high wooden fence. PHOTOS: SHAWN MCAVINUE
It appears the American poet Robert Frost was right when he said "good fences make good neighbours''.

Rose Cabral and her son Peter's home backs on to the new BP station in Gordon Rd, which opened about five weeks ago.

Between their property and the BP site now stands a high wooden fence, behind which is the station's car wash.

Thanks to the new fence, the car wash could not be heard from her property, Mrs Cabral said.

"The only ones that notice when it starts up are my two cats, Buttons and Missy.''

Mr Cabral said the fence, which was built by BP Oil to block sound and light coming from the service station, stood at different heights along the back of Irvine St properties.

The fence was at its highest at the back of his mother's home and those of her immediate neighbours.

A neighbour demanded it be higher at that point so it would dampen the noise from the car wash.

The higher wall "cut out 90% of the glow'' of the canopy covering the fuel pumps,

"We love it. Everything is great,'' Mr Cabral said.

The new fence at the back of Murray Stephen’s house in Irvine St provides a barrier to theBP station in Gordon Rd. PHOTO: SHAWN MCAVINUE
He had two regrets regarding the new wall.

The first was failing to ask BP Oil to lay a new concrete foundation on his mother's property for her glass house, which need to be shifted to install the fence.

The second regret was failing to ask for a gate in the fence so it took less time to get to the BP cafe for a coffee, he joked.

Murray Stephen' property, which is further north in Irvine St, also backs on to the BP site, near the service station's shop.

The fence is lower at the back of his property than at Mrs Cabral's house.

However, he had "no complaints'' about the new BP station, he said.

But he would prefer it if the canopy on the forecourt did not emit light 24 hours a day and the new fence was lower at the back of his property, as it blocked his view of Silver Peaks.

"But it's not a problem. We wouldn't even know the garage is there.''