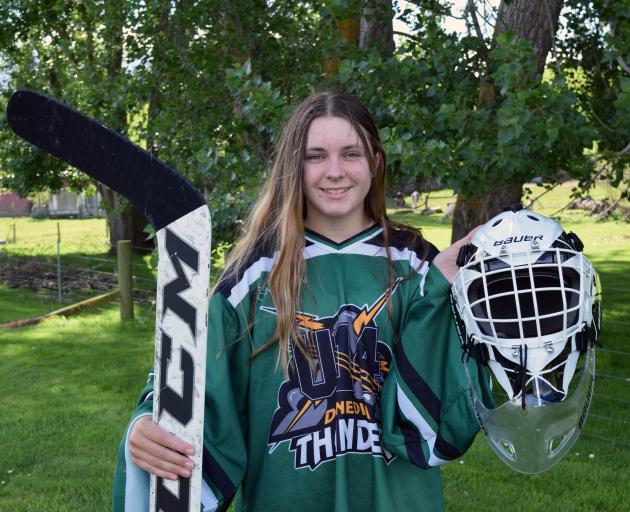 Breane Byck (13), of Ocean View, is a goalie for the Dunedin Thunder and Southern Knights ice hockey teams. Photo: Shawn McAvinue
A Taieri girl swapped a figure-skating dress for an ice hockey jersey and has never looked back.

Breane Byck (13), of Ocean View, said she was 9 years old when she was figure-skating at Dunedin Ice Stadium.

She saw an exciting game of ice hockey being played on a neighbouring rink and decided to change sporting codes.

‘‘It looked pretty cool and I don’t like wearing dresses.’’

After a month of playing ice hockey, she realised she was destined to be a goalkeeper.

‘‘It looked really fun, so I started and I haven’t stopped.’’

She built up an impressive save rate and was selected to play in international tournaments.

The St Kilda’s pupil played in a Southern Knights mixed team at an ice hockey tournament in Minnesota, US last year and has been selected for the same team to play a tournament in Japan next year.

Teams from Australia, Canada, Europe, Japan and New Zealand will compete in the tournament. Breane aspires to represent New Zealand in ice hockey.

She said the most satisfying part of being a goalie was making a clean ‘‘glove save’’ — catching a puck cleanly in the net in your glove.

‘‘If you make some good saves and keep your team in it, you can be a hero.’’

Past heroics include making a save when a puck hit the side of her helmet, dislodging bolts and causing the cage to swing open.