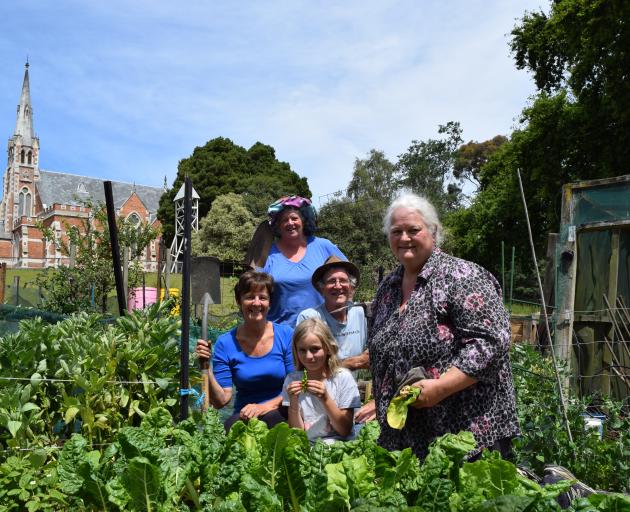 In the Taieri Times in October last year, garden co-co­ordinators Margaret Scott and Jan French reopened the garden and made a call to the community for support to revitalise it.

Mrs French said the garden — on a block of land owned by East Taieri Church in Cemetery Rd — opened in July 2005 but was abandoned after the site was repeatedly hit by flooding.

Since reopening, about 15 volunteers had transformed a ‘‘jungle’’ to a garden and had already harvested produce including beans, celery, cherry tomatoes and silverbeet.

The transformation includes the building of nine raised garden beds.

The beds were necessary because the water table was high and the area was flood­prone.

More sleepers were needed to make more beds so seeds could be sown for winter crops, such as broccoli, cauliflower and lettuces.

The tubs would be used to grow produce and to act as flood protection.

Since reopening, an old fence had been torn down and the footprint of the garden had increased by more than half.

She thanked the church for the use of the land and the Saddle Hill Foundation Trust for its support with administration.

She was also grateful to the Mosgiel District Lions Club for giving $380, which was used to buy macrocarpa sleepers to build garden beds.

Many organisations had given free goods, such as fish carcasses for fertiliser, and services, such as lawnmowing, but Ms Scott declined to list them due to fear of offending anyone by forgetting to mention them.

All the supporters would be invited to a morning tea at the garden later in the year, after the new shed and a rabbit-proof fence were installed.

Inside the shed would be a whiteboard listing the produce ready for harvest and the work that needed to be done.

Other plans include installing a ‘‘kai cupboard’’to put excess garden produce on the side of Cemetery Rd to share with the local community.

Volunteer Vic McDonald said he had a vegetable garden at home so he did not harvest anything from the community garden.

He volunteered because it was a chance ‘‘to do something for somebody else’’.