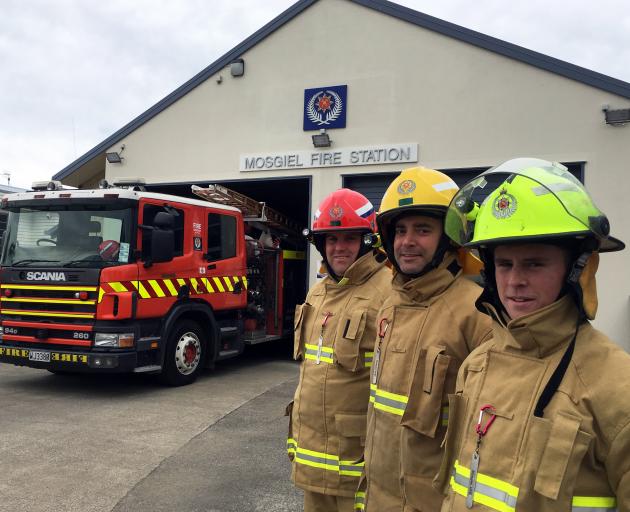 About 20 men and women are members of the Mosgiel Volunteer Fire Brigade.

The crew are on call on weekends and public holidays and between 5.30pm and 7am on weekdays.

Ben Parker, of Mosgiel, joined the brigade as a recruit about 11 years ago and has missed many family occasions to attend incidents.

"I've missed a lot of wedding anniversaries, birthdays, Christmas Day - you name it. I didn't know what I was getting myself into when I first started.''

He had attended five "full-blown house fires'' since joining the brigade, mostly on public holidays.

The unpaid work - which ranged from extinguishing chimney fires to removing motorists from crashed cars - was rewarding because he was helping people having a bad day.

People who had been helped often thanked the crew at the scene or at the station days later.

In 11 years, he has worked his way through the ranks from recruit to firefighter, qualified firefighter, senior firefighter and, about a month ago, station officer.

"It takes a bit of dedication to get where I am.''

His paid job was working as a full-time firefighter at Dunedin Airport.

Stefan Thorburn, of Mosgiel, who works as a quantity surveyor, said he joined the brigade as a recruit in November last year and passed a seven-day course in July to progress to the rank of firefighter.

He joined the crew to make a difference, be involved in the community, be part of a team doing exciting work, and as an incentive to stay fit.

His reason for joining was simple.

He was booked into Fire and Emergency New Zealand courses in Dunedin and Christchurch in November. The courses would test his reaction to a range of scenarios to ensure he was suitable to be sent to an incident as part of a first response crew.

Mr Parker said recruits were "eased in'' to the new role.

When he was a recruit it was different, he said.

"I remember my first call-out like it was yesterday - it was the most horrific car accident I've been to in my life.''

The brigade is having an open day at Mosgiel Fire Station, in Green St, between 11am and 3pm on Saturday October 6.

The purpose of the day includes promoting fire safety and the work of the brigade.

Mr Parker said firefighters would be available to answer questions about the job and about the recruitment process, in a bid to get more volunteers.

Brigade members must live within 5km of the station, he said.