Town hall at 80 ready for facelift 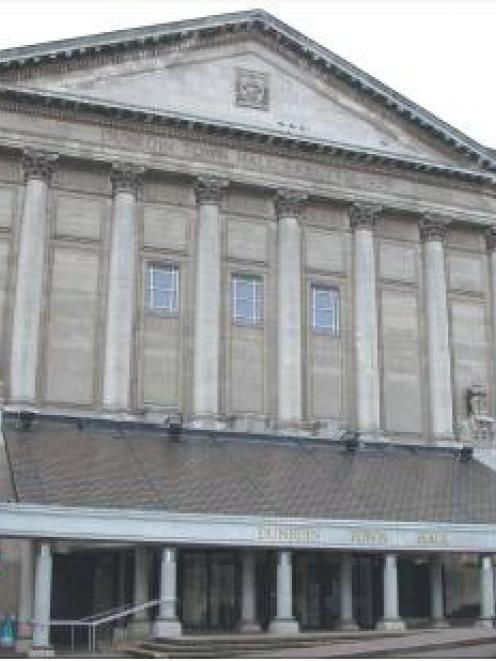 Grand old building . . . The Dunedin Town Hall
She is cracked and weathered in places and, at 80 years of age, is definitely showing signs of age.

Yet for all her wrinkles, the Dunedin Town Hall has a bright future, Dunedin Mayor Peter Chin believes.

Mr Chin was happy to sing the building's praises yesterday on the 80th anniversary of the town hall's opening on February 15, 1930.

Much has changed in the intervening years, as town hall dances, bow ties and long dresses gave way - at least sometimes - to coarse Scottish comedians, student graduations and rock concerts.

However, there were no signs of a cake yesterday - only enthusiasm for the rescheduled $45 million town hall upgrade, following the Dunedin City Council's vote earlier this month to defer elements of the work.

Mr Chin told the Otago Daily Times he was confident the "facelift", once eventually under way, would prepare the building for life after 80.

"It's undergoing a transformation.

"It's a kind of facelift, and I suppose anyone who is 80 years old . . . to be getting a facelift that's going to take you into the next 80 years, and keep you relevant to the changes in society, is huge."

Mr Chin said he had grown up living within 500m of the town hall, and believed its "magnificent" auditorium - with "Norma" the town hall organ the centrepiece - had a special place in the hearts of each generation of residents.

"Over the 80 years, it really has been that cultural, social heart of the city.

"There's no doubt it's the best town hall in New Zealand, if not Australasia," Mr Chin said.

It had also, despite its forbidding exterior, become a more inclusive and welcoming place, with a wider range of uses and a permanent staff occupying it rather than it being locked up when not in use, he said.

That welcoming presence would be improved again when the upgrades were completed, opening up the venue and allowing people "to use it in the way it's meant to be", he said.

The decision - subject to public consultation - to defer the upgrade meant work on the Municipal Chambers was not expected to begin until at least June this year, followed by the Dunedin Centre, beginning in March 2011, and the town hall, in September 2011.

The town hall work would include having the existing entrance replaced by a glass cube, as well as a general upgrade that included refurbishing or replacing seating and an overhaul of lighting and theatre services, plus refurbishment of the surrounding foyer areas and facilities.

The work was also to include upgrades to meet fire and other regulatory codes, at a cost of more than $20 million across all parts of the building.

Mr Chin said a report was being prepared by council staff discussing the work to meet modern fire regulations and the implications of deferring the improvements.

The report was expected to be made public next month, and would include possible restrictions, albeit small ones, to audience sizes at the town hall until the work was carried out, Mr Chin confirmed.

However, he was confident the wait would be worth it.

"It's 80 years old and it's going through a period of maintenance.

"But in another couple of years, when you look at it, it will be 82 years old by then, but with its refurbishment it will look nicer than it does now.

"More importantly, it will be more functional," he said.