The truth about city planners 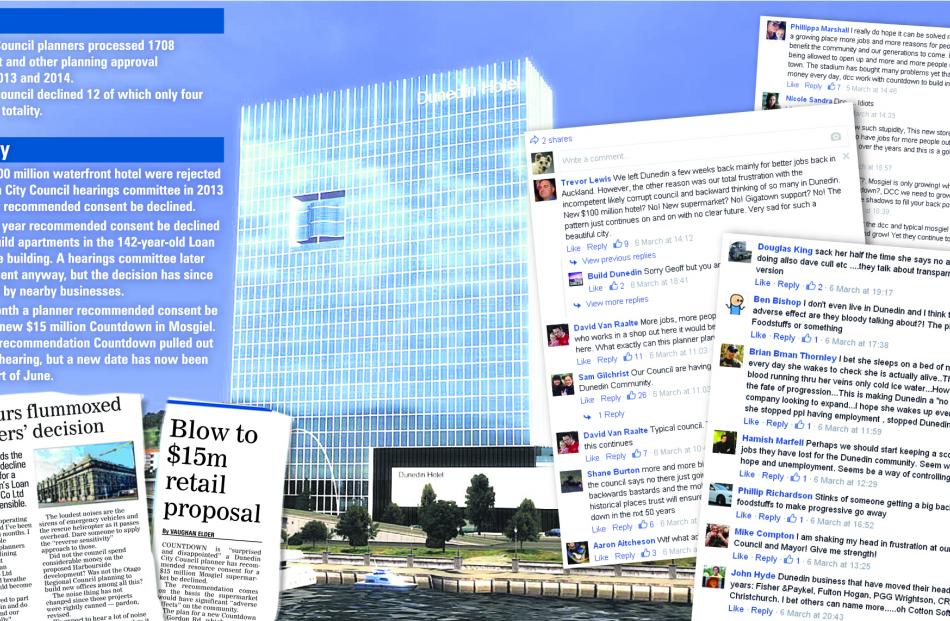 Dunedin City Council planners are seen by many critics as naysayers who hold the city back. Reporter Vaughan Elder follows up on a recent controversy and finds out if there is any truth to the perception.

The response on social media was fierce when a planner earlier this month recommended resource consent for a new $15 million Countdown be declined on the grounds it would have significant ''adverse affects'' on a residential area.

''So the list of prohibited progress in Dunedin grows from hotels, subdivision, and quarrying to include supermarkets,'' one person said.

Another said the problem was the council only had one planner (they actually have seven) and they seemed to be the ''wrong person for the job''.

Comments almost unanimously slammed the council and its planners for ''yet again'' holding back progress.

Council resource consent manager Alan Worthington said the perception planners were all naysayers was wrong and critics online were not coming from an informed position.

''The perception is we are saying no all the time, but in reality that is definitely not the case.''

He said his view was backed up by ''raw numbers'', which showed the council almost always said yes.

Of those 12, only four had been declined in ''totality'', with three certain to be resolved through the appeals process, three the subject of recent appeals and two declined in part.

When planners did recommend consent be declined it was not a ''personal decision'', but about following the process set down in the Resource Management Act.

''Planners, like other professions, know the value and importance of good decisions over [populist] decisions.

''We go to great lengths [to ensure] we are doing it right, because if we get it wrong [it can be appealed].''

When it came down to it, planners were administering the council's district plan, which dictated what activities were allowed in different areas - for example apartments were not permitted in the middle of industrial areas.

As an example, the planned Countdown in Mosgiel was in an area zoned residential, which meant it was a ''non-complying'' activity and had to pass the strictest test.

While some got annoyed when consents were denied, people also enjoyed the certainty that came with the district planFor example, when buying a house it was reassuring to know your neighbour could only legally build a house and not a shopping mall.

Asked if the criticism aimed at planners when they made a controversial decision hurt, he said each planner responded differently.

However, he would encourage planners to avoid reading online comments altogether.

''I would encourage them not to bother, because it's not coming from an informed position really.

''It's just like a professional sportsman. A lot of them never read the stories about themselves ... because it's just not helpful.''

Dunedin lawyer and the Law Society's environmental law committee chairman Phil Page, who has represented people fighting consent decisions, said he could not point to any data showing Dunedin's planners were any different from those elsewhere in New Zealand.

The experience people had with the planning department was different depending on the circumstances.

''For example, the people who have been involved in the refurbishment of heritage buildings in the Vogel St precinct are experiencing extremely positive support and co-operation from the planning department.

''Conversely there are others - such as my clients on the [John Wickliffe House] appeal - who are experiencing a different set of circumstances.''

To some extent Dunedin City Council planners were ''hamstrung'' by a district plan which was ''well past its used by date''.

The plan was now in the process of being updated.