Turn for better at Moana Pool 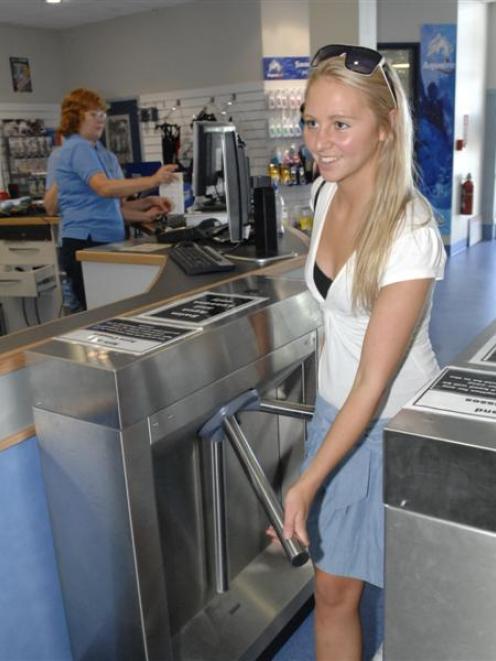 Moana Pool lifeguard Rosie Hodson (20), of Dunedin, makes her way through the pool's new swipe-card turnstile entry yesterday. In the background is receptionist Carolyn Bird. Photo by Linda Robertson.
The introduction of swipe cards and turnstiles at Moana Pool should result in a significant drop in the "huge" number of fee-dodgers sneaking into the facility, Dunedin City Council aquatic services manager Steve Prescott says.

Up to 120,000 people were believed to be entering the complex without speaking to pool staff each year, Mr Prescott said.

Although some were entering as spectators and so would not need to pay, it was estimated the pool was losing about $60,000 in revenue annually. The problem had persisted throughout his 13 years at the pool, and probably longer, meaning the total amount of revenue lost was likely to be many hundreds of thousands of dollars, he said.

Work on the pool's new $160,000 entrance began in July last year and was completed last month, with new turnstiles, reception desks and swipe-card access for all members and casual pool users, as well as a redeveloped shop.

The changes were in response to customers' requests for better services and would also benefit the pool's operation, he said.

As well as helping stop fee-dodgers, it would speed up entry to the pool and provide a near-100% accurate customer count, which could be useful when arguing for extra funding or pool space in future council budgets, he said.

The redevelopment had not been without problems, including infrared scanners unable to read some bar codes printed on casual customers' passes.

One customer also told the Otago Daily Times the turnstiles were "cumbersome" for young children.

Mr Prescott acknowledged some teething problems, but said the system was improving.

"People, until they understand the process, get a little bit frustrated.