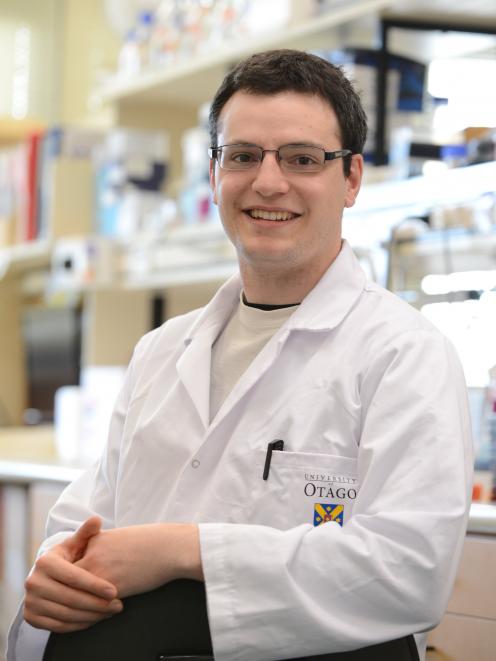 University of Otago student Chris Harris (25) continues work at the cancer genetics laboratory, in the Otago biochemistry department. Photo by Gerard O'Brien.
About 600 men die from prostate cancer in New Zealand every year.

One out of 13 men will go on to develop prostate cancer before the age of 75. This puts it at a similar level to breast cancer in women, and yet prostate cancer has nowhere near the same level of support.

The ability to cure this disease is strongly determined by how early it is diagnosed.

Early and accurate diagnosis is the biggest challenge facing this disease today.

In the United States, for example, about 90% of patients diagnosed with prostate cancer receive invasive treatment, potentially with terrible side effects.

However, these patients only had a 3% chance of this disease progressing and becoming deadly.

That is an unacceptable situation.

Our project aims to improve prostate cancer diagnosis and bridge the gap between treatment and reality.

Ambroise Pare, a 16th-century French military surgeon, was the first to recognise the prostate gland as a distinct organ.

The fact that it was identified so late compared to other organs is a testament to its awkward position behind the pubic bone and at the base of the bladder.

Quite apart from other organs such as the liver or lungs, which are like distinct islands, the prostate gland is intimately enmeshed with the urethra, surrounding tubes, neurovascular bundles and bladder.

This makes surgical removal or targeted radiation of a cancerous prostate particularly difficult and prone to complications, such as erectile or urinary dysfunction.

This point underlines the necessity of accurate diagnosis to avoid unnecessary complicated treatment.

The primary non-invasive diagnostic method for prostate cancer is currently a blood test for a prostate protein called PSA.

The more PSA in your blood, the more cancer you have, maybe.

Dr Richard J. Ablin, the discoverer of this protein, and author of The Great Prostate Hoax: How big medicine hijacked the PSA test and caused a public health disaster, never intended for PSA to be a diagnostic tool.

He wanted to use PSA as a monitor for already diagnosed cancer patients instead.

We aim to take a more direct approach by analysing small amounts of prostate cells exfoliated in urine.

There is evidence that very small amounts of prostate cancer cells, between one and a few dozen, are shed normally into the urine at an early stage of the disease.

Our aim is to pick out these cancer cells and extract molecular information from them to predict if a tumour is going to become a malignant monster or a benign wimp.

Our method is roughly the equivalent of detecting a sprinkling of less than a pinch of salt in an Olympic-size swimming pool, then figuring out what kind of salt it is and where it came from.

The individual cell is like a town, because it has its own functions and makes products that are useful for its growth.

The important instructions for the cell to make its products are made of DNA and are stored in the nucleus.

The DNA instructions stored in the nucleus can't be moved to the cellular factories, so copies of the instructions need to be made for delivery.

These copies are made from a molecule called RNA. Cancer happens because the DNA instructions have become muddled up and the cell divides uncontrollably.

Some cancers have more serious DNA muddle-ups than others, and are therefore more aggressive.

We will be able to see how bad this muddle-up is from looking at the delivery RNA.

Our aim is to detect the RNA of single prostate cancer cells in urine in order to develop a sensitive tool that can inform early treatment and prognosis.

Studying biological molecules at the individual cell level is important.

When looking at the characteristics of any kind of population - people or cells - studying them as a whole, as opposed to individuals, can leave out important information.

For example, the average score across all players in a rugby team might be 20 points, but this gives no indication that one player scores 80% of all the points.

There may be a small number of players within a tumour who are doing the most damage, and we need to study them to understand how to take them out.

The applications for studying the characteristics of individual cells are seemingly endless.

It only takes a single or a few cancerous cells breaking off from the first tumour to spread around the body.

Analysing single cells promises to revolutionise our understanding of cancer biology and open doors to a single-cell approach to prognostics, diagnostics and treatment.

Only a single-cell approach can answer the questions that are fundamental to developing effective cancer therapies.

How does a tumour spread around the body and why do relapses occur?

Does a migrating cancer cell come from a sub-population of the first tumour?

Do cancer cells combine with circulating cells, such as white blood cells, to spread around the body?

Perhaps most importantly, are there drug targets that are specific to spreading individual cells?

There is a long road ahead, with many questions still unanswered.

Any improvement in obtaining a quick, early and highly informative diagnosis would have a big impact on survival rates for prostate cancer and other cancers.