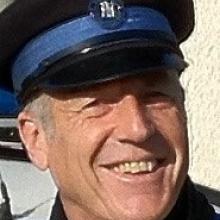 John Hood
A former Dunedin man hailed as a hero for rescuing four girls in England has reportedly died of Covid-19.

Mr Hood moved to Felixstowe, England, from Dunedin in 2004.

He worked for the now defunct Union Steamship Company and in the Dunedin Supreme Court, before being approached by Radio Otago to cover weekend sports on Sportswave.

He told the Otago Daily Times in 2012 that once he emigrated, he joined the Suffolk Constabulary, in Ipswich.

"My job is that primarily of a bobby on the beat who deals with low-level crime, domestic and neighbourly disputes, antisocial behaviour, theft, car crime and drug factories. I have a patch that is in a deprived area of Ipswich, where there is a lot of unemployment and crime. I spend a great deal of my day in the community in a proactive role and as a facilitator, conducting restorative justice meetings with victims and wrongdoers," he said at the time.

According to The Daily Mail, Mr Hood was praised in September 2016 when he swam 250m out to sea at Felixstowe to save four girls.

He was handed a Stars of Suffolk award for carrying out the rescue, despite having had a pacemaker to correct a slow heartbeat.

"He lived life to the full and he will be hugely missed."

John was in Dunedin's 'West Side Story' long ago.