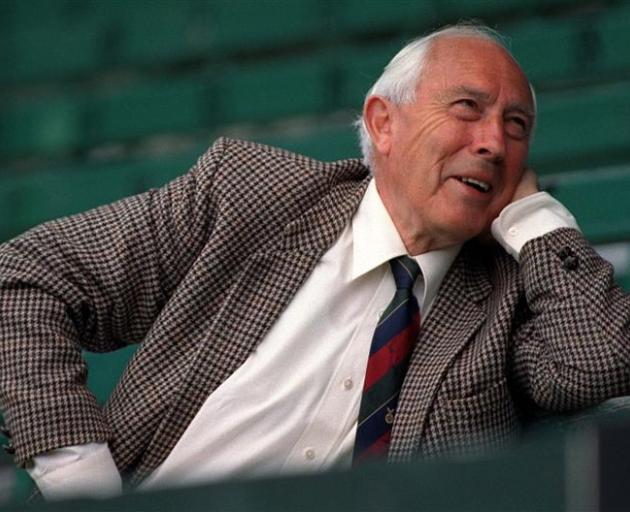 Iain Gallaway enjoys a joke at Carisbrook. Photo from ODT files.
The cricket and rugby commentator Iain Gallaway, known as the Voice of Carisbrook, has died aged 98.

Gallaway provided rugby commentaries for 26 years and cricket for 40, until signing off in 1992.

Gallaway was born in Dunedin in 1922 and educated at Christ's College and Otago University.

He began his working life as a cadet reporter on the Otago Daily Times and always said he really wanted to be a journalist but he switched to law after his service in the Second World War and became a distinguished lawyer. He was an officer in the Otago and New Zealand Law Societies.

He played three first-class matches for Otago as a right-handed batsman and wicketkeeper from 1946 to 1948.

In 1953 he was invited, at short notice, to become a sports broadcaster, beginning a 40-year commentating career and launching the voice which became synomymous with Dunedin's Carisbrook ground - or the House of Pain as it became known.

He initially made his name commentating cricket, but also covered hundreds of rugby matches. 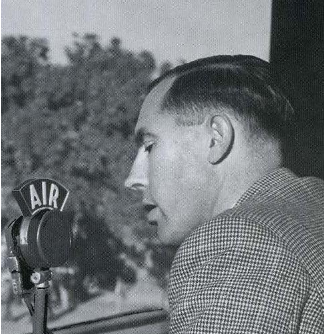 Iain Gallaway at the mike early in his long career. Photo: teara.govt.nz
He said he had seen every test match at Carisbrook since 1930 - bar one.

"I missed the 1999 one. I was President of New Zealand Cricket and I was proudly at Lords in the President's Box watching New Zealand beat England for the first and only time."

Iain Gallaway decided to hang up his microphone in 1992 after the Cricket World Cup, fearing his failing eyesight would lead him to make wrong calls. His last-ever commentary at Carisbrook was the match between New Zealand and India as part of the World Cup competition.

He was devastated by the decision to close down his beloved Carisbrook in 2010, in favour of a new Dunedin stadium. Carisbrook hosted its last rugby test on 22 July 2011.

"I first went there as a 7-year-old in 1930 when I saw my first match there. And I've lived and loved on the ground, it's my second home and to me. It's a great tragedy that we're losing it.

"I love Carisbrook. I think it's just the atmosphere and the fact it was a multi-purpose ground. You used to have the New Zealand Highland Pipe Band championships at Carisbrook and that used to stir my heart. It's just got great tradition," he said. 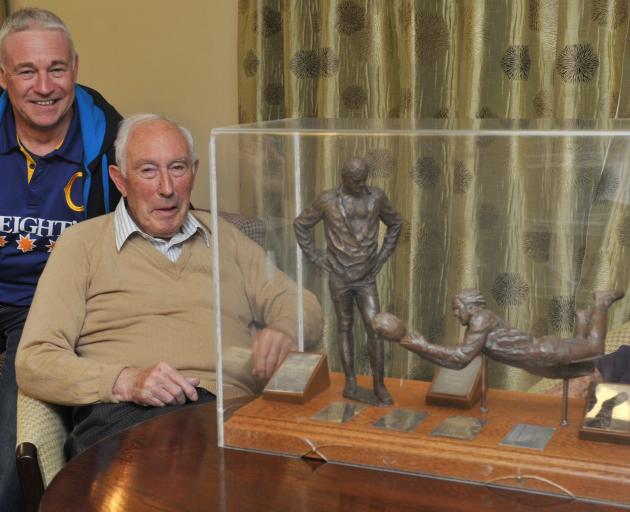 Richard Perkins and Iain Gallaway with the Gallaway Trophy in 2013. Photo: Craig Baxter
He was also deeply involved with the Anglican Church and the Halberg Trust for disabled children.

Gallaway's services to sport and the community were recognised by an MBE in 1978 and a QSO in 1986 marked his services to the Anglican church - he was chancellor of the Dunedin Diocese for 25 years.

In 1991 he was presented with the Mobil Radio Award for his outstanding contributions to radio in New Zealand and in 1999 he was given a Halberg award for services to sport.

He has also been an official patron of the Otago Cricket Association.

His autobiography Not A Cloud In The Sky was published in 1997.

Good pose there ODT! He was a man of grit and passion and true gentleman! Greatly missed. Him and all like him.