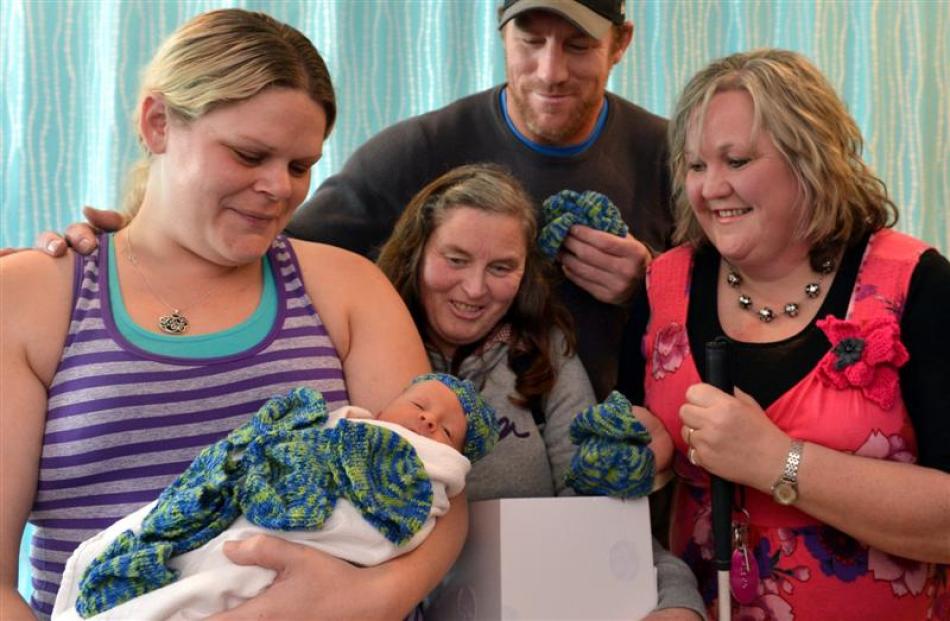 Three blind women had a good yarn for a special cause in Dunedin yesterday.

And then pulled the wool over the eyes of a new generation of Highlanders rugby fans.

The project started at a Blind Foundation leadership programme in February, where the three women discovered a shared passion for knitting and decided they wanted to do something to make a difference.

They set a goal of knitting beanies in Highlanders' green and blue for premature babies in the NICU.

''NICU has a very special place in my heart,'' Mrs Dickson said.

''My daughter Rebecca was born in the unit 40 years ago and and my 6-year-old granddaughter Rayne was a month early too, so ended up there too.''

Ms Woods was accompanied to the NICU yesterday by her 21-year-old nephew Will Phillips, who also spent time in the unit as a premature baby.

''We knitted enough beanies to make up a rugby team of 15,'' Ms Woods said.

''I had to take a sighted helper into the wool shop to get the wool and then I'd sit down and knit in front of Coro Street every night.

"I didn't need to look at the screen or at my knitting. But I dropped the odd stitch and had to start over again.''

The 21-bed NICU provides care for prematurely born babies from 23 weeks' gestation and newborn babies up to three months who require intensive care.

''These Dunedin winter months can get very cold and beanies are ideal.

"The babies don't need them in the incubators because they're nice and warm. But it's good to send them home with their parents in some warm woollies.''

''They're lovely. They're very cool,'' he said, while trying one out on the head of Highlanders team-mate Kane Hames.