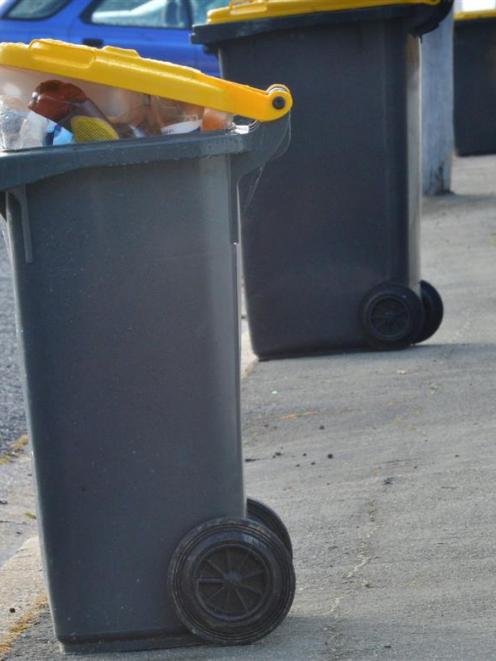 Shower curtains are not recyclable through the Dunedin City Council's kerbside collection system.(The items that can be, are listed on the DCC website under the services menu.) But on the occasion of a visit to the FullCircle recycling centre there is, nevertheless, a shower curtain - or it could be a sheet - wrapped around the moving parts of the operation's sorting machine. Everything stops while it is cut out.

However, FullCircle territory manager Taane Royce nominates shopping bags as his biggest bugbear. Recycle those in the red bins at supermarkets, he says. They are just a ''nightmare'' for his Green Island plant.

These are not the only wrinkles the staff at FullCircle would like to see ironed out. Plastic bottles and metal cans are quickly separated from paper by FullCircle's clever machinery when the former are not flattened. Unfortunately, quite a few of the bottles and cans arrive already squashed, foiling the machinery's attempts to differentiate.

A more recent head-scratcher for recyclers has been the decision by Fonterra brand Anchor to introduce new bottles. The three-layer plastic bottles are causing grading problems for some recycling operations, resulting in the bottles being lumped in with low-grade plastics, that are then exported. At this stage, that is not the case at FullCircle's Dunedin operation, as the Christchurch reprocessor that takes Dunedin's milk bottles is still accepting the new Anchor containers. But the Christchurch firm faces extra sorting and may have to introduce a further dye process to its manufacture of recycled resin because of the new bottles.

Fonterra says the Anchor bottles are still made of the same plastic.

''While some councils and recycling organisations will need to separate the bottles, the bottle is no different to other coloured HDPE bottles that some recyclers separate and recycle daily,'' a spokesman, Craig Irwin, says.

The contaminants faced by staff at FullCircle are something of a microcosm of the international picture, where pressure is on to provide clean differentiated product.

China, by far the largest market for recycled materials is throwing up a ''green fence'' and rejecting shipments contaminated with non-recyclable waste or other impurities. Commentators say it is part of a renewed focus on environmental issues in the country.

FullCircle's Dunedin operation is ahead of the game in this respect, by separating glass at the kerbside, it avoids one of the most common problems with recycling: glass shards fouling other materials.

Meanwhile, Wanaka Wastebusters has launched its Unpackit 2013 Packaging Awards, looking for the best and worst of packaging. Nominations can be made on the organisation's website.

Several worst-packaging nominations have already been received for the new Anchor bottles.