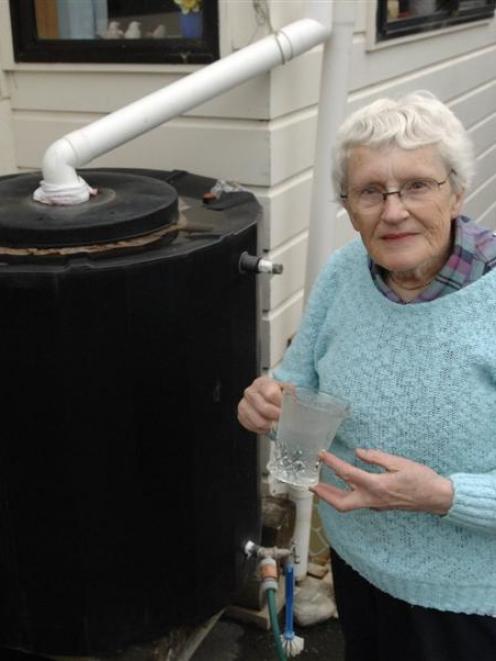 A system that works? Dunedin woman Lyndall Hancock says rooftop rainwater harvesting should be encouraged by the Dunedin City Council. Photo by Linda Robertson.
Lyndall Hancock has spent a lifetime with a rainwater tank beside the house.

Over the years, the Dunedin woman has used water collected from the roof - running down through pipes to a tank beside the house - for cooking, cleaning and even drinking, once strained and boiled.

Now aged 80, Miss Hancock lives in Waverley and still uses rainwater harvested from her latest tank to water the garden.

She told the Otago Daily Times the time was right for the Dunedin City Council to consider offering incentives to urban homeowners wanting to invest in similar schemes.

The tanks would also be useful as an emergency supply, should earthquake damage in Christchurch ever occur in Dunedin.

"It used to be that houses all had a rainwater barrel. When I was a child, we had that at home. I can't remember what the water was used for, except that when there was a drought there was always water there for the vegetable patch.

"It's sensible. We could run out of water as quick as look at you," she said.

Her views were supported by Dunedin city councillors Fliss Butcher and Jinty MacTavish, who both said the council should be doing more to encourage rainwater harvesting.

Cr Butcher said rates relief could be one option, or the council's nearly $400,000-a-year proceeds from the Government's waste-minimisation levy could be another.

"It's a waste levy. For me, rain falling out of the sky and not being used is a waste," Cr Butcher said.

However, council water and waste services manager John Mackie said the council did not offer incentives, such as rates relief, to promote the use of tanks, and funds from the levy were already allocated to other waste-minimisation projects.

He believed it would be difficult to build an economic argument for the council to invest in rainwater tanks in urban areas.

The tanks could cost up to $3000 to install, and were relied on in some rural residential parts of the city - such as Allanton - for supplies, he said.

The number of tanks in urban parts of the city was not clear, but promoting their use would raise several issues.

Dunedin had an "abundant" supply of rainwater most of the time, and, it could be argued, was already harvesting rainwater in catchments feeding the Deep Stream and Deep Creek reservoirs, which provided 60% of the city's water needs, he said.

The council's strategic planning had also confirmed the capacity to meet city water demands from existing sources for the next 50 years.

That meant any savings from capital spending on additional water infrastructure would be slight if urban water harvesting was encouraged.

The demand for reticulated supplies during peak summer periods could place pressure on the council's service, but that was also the period when rainwater tanks would be least effective, due to the lack of rainfall, he said.

The numbers had been crunched several times over the years by council staff - including himself in 2006 - and studied in other parts of New Zealand, but each time the analysis arrived at the same conclusion.

"It doesn't stack up economically," he said.

Households were already encouraged to store water in jerrycans and other portable containers, which could easily be refilled, and could also use hot-water cylinders in the event of a destructive earthquake, he said.

And, even in the aftermath of the Christchurch earthquake, water supplies had been restored to most homes relatively quickly, he believed.