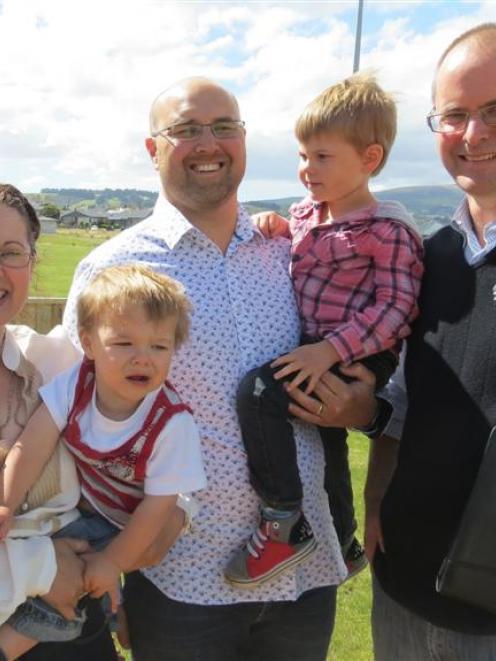 St Clair residents (from left) Angela, Luca (1), Chris and Matai Thomsen (3), took part in a new homeowners survey for Anderson and Co planner Conrad Anderson. Photo by Jonathan Chilton-Towle.
Out-of-towners looking to buy a new home in Dunedin are likely to flock to Waverley, while St Clair is most popular with Dunedin buyers, a recent survey of new homeowners suggests.

The survey, conducted by Anderson and Co Resource Management, targeted more than 200 homeowners in new housing developments in Waverley, St Clair, Fairfield and Mosgiel, and those who had bought their former homes.

''We believe this project is important to Dunedin, as it will provide rich information about the rationale and flow-on effects of new housing in Dunedin,'' he said. ''Most people moving to a new or near-new home have sold a house.

''We want to explore who purchased the old house and why. This will provide a picture of the flow-on effect of a new house, and thus inform us on some of Dunedin's housing secrets.''

Preliminary results showed Waverley had the largest percentage of people new to Dunedin buying there.

The St Clair development had attracted the largest spread of people living within the Dunedin area. People moving to St Clair made the largest financial step-up from their previous homes.

One new St Clair resident, Chris Thomsen, had been living in Kaikorai before he moved to St Clair.

''It was the most effective way to get us all the things we wanted in a house at a relatively affordable price.''

Anderson and Co director Don Anderson said he hoped the information collected in the survey would be of use to Dunedin City Council planners. The survey is still open online at www.RMApro.co.nz