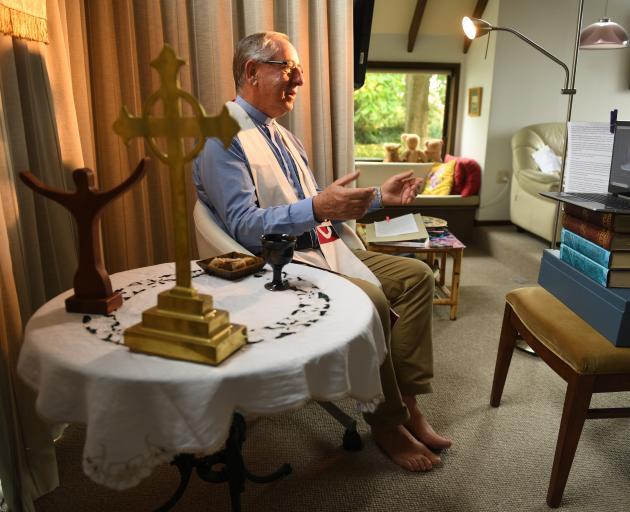 Knox Church minister the Rev Dr Kerry Enright prepares to broadcast part of Easter services later in the week from a recently-adapted studio area at his house during the coronavirus lockdown. PHOTO: STEPHEN JAQUIERY
Extensive phone-calling by volunteers has strengthened Dunedin's community as preparations continue for a new wave of internet-linked Easter church services during the coronavirus lockdown.

The Rev Dr Kerry Enright, of Knox Church, said that Knox, like many other Dunedin churches, had been finding new ways of communicating with the congregation's nearly 300 households.

The internet and YouTube were used last weekend to broadcast a service on Palm Sunday, and other pre-recorded services would be offered during Easter Holy Week.

Church volunteers using phone trees had contacted parishioners to ensure they were being supported, including with groceries, if needed.

New connections were also being formed with people who had moved away from Dunedin but could now keep in touch online.

A former parishioner, now in Central Otago, had joked they had never thought they would watch a Knox Church service in pyjamas, he added.

Captain David McEwen, of the Salvation Army's City Corps, said a service would be offered nationally online on Sunday morning through Salvation Online.

A Dunedin pastoral care team had also been contacting people to ensure they were supported and the same "really exciting" response was coming from other city churches.

"It's just all coming together with people — everyone is looking after everyone else," he said.

Religious outreach was continuing through Zoom Webinar, and many people were contributing, he said.

The Very Rev Dr Tony Curtis, dean of St Paul's Cathedral, Dunedin, said details of planned internet and YouTube broadcast of Easter services during the Level 4 lockdown were available on the internet at stpauls.net.nz/easter.

Many people were "ringing around" with support, and he hoped this strong sense of community would be retained when the lockdown was over.