Her country would never forget what he did to restore the freedom of France during World War 2, Dr Leurquin said.

She was also aware two members of Mr Selwood’s family lost their lives, one at Passchendaele during World War 1 and another in France in World War 2. 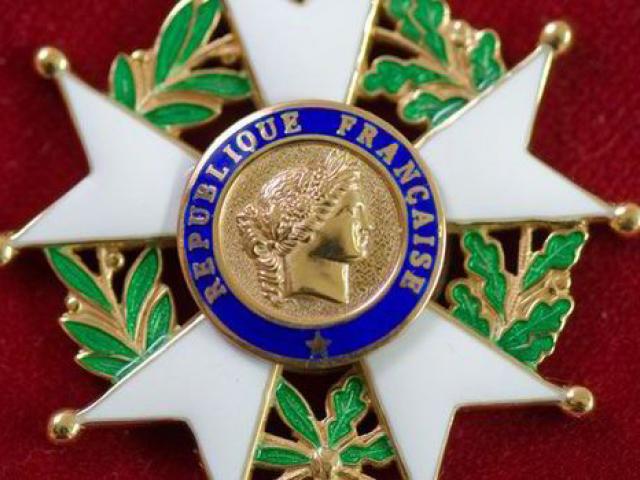 A close-up of the French Legion of Honour medal.
Mr Selwood’s great-uncle, Francis Milne, was 43 when he was killed in World War 1. His body was never recovered and his is one of about 12,000 names on the Tyne Cot Cemetery and Memorial in Belgium.

His uncle, Thomas Milne, was killed in France at the age of 21. Although given a christian burial, his body was lost during later fighting. His name is on the memorial at Grevillers Cemetery near Pas-de-Calais.

As a navigator, the retired archdeacon said he played "a very small part" in the liberation of France.

"I was part of a mighty force in a mighty campaign."

His first venture into enemy air space was about two months after the D-day landings in 1944. He was a 20-year-old navigator and still part of a training unit when he flew with a "ruse force" of  more than 100 Wellington bombers  above Caen and Bayeux during the night of August 10, 1944.

Their role was to draw up German night fighters by dropping metallic strips, "window",  to block the enemy radar, so the main bombing force could fly further inland on its raids.

Most of the missions were against railway marshalling yards and synthetic oil plants. The loss of fuel was probably the biggest contributor to Germany’s failure in the war.

Mr Selwood said he had set foot in France on only five occasions.

"That was after D-day, when we flew in to bring back prisoners of war. We would have been on the ground for only a few minutes."

And while Dr Leurquin had talked of France’s debt to the Allies, the Allies also owed a great deal to the people of France, Mr Selwood said. Many did not realise 300,000 Allied troops escaped from Dunkirk because "the French held off the Germans long enough for us to get off". In addition, French people rescued and cared for many airmen who were shot down, "passing them on" so they could return and fight again.

Many French citizens also lost their lives because Allied bombers had to attack targets in France which were German or had been taken over by the Germans.

Bomber Command lost 46% of its men during war.

The newest Knight of the Legion of Honour said he would wear his award "with great honour on behalf of all who didn’t get back".