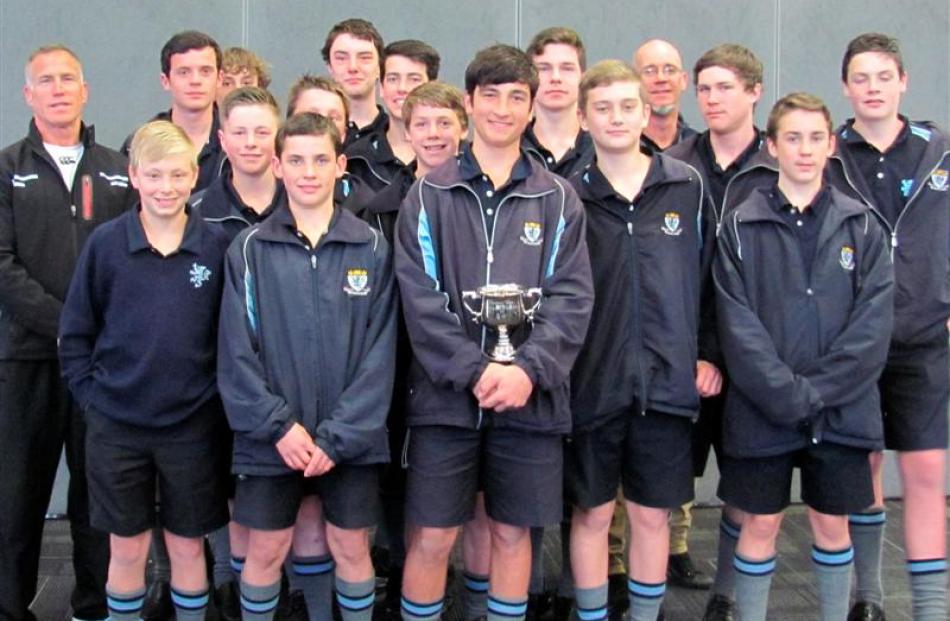 The junior A basketball team was unbeaten in Dunedin and beat Waimea 73-49 to win the South Island junior title.

The senior A basketball team travelled to Nelson and won all of its pool games before losing to eventual tournament winner Christchurch Girls' in the semifinal. St Hilda's finished third after beating Kavanagh 51-38.

In Rotorua, the A hockey team competed in the Federation Cup. After great wins in pool play, it lost to Villa Maria in the quarterfinal, but responded with a 1-0 win over Rangi Ruru to finish the tournament in seventh. The B team competed in the Jenny McDonald Cup in Cromwell.

The first XI football team finished seventh - the top South Island school - at a tournament in Nelson, after beating Tauranga Girls' 7-6 in a penalty shootout. The second XI played in a Dunedin tournament.

Jade Middleditch (year 9), an Otago under-14 and under-17 football representative, has been selected in the Federation and National Talent Centres.

Michaela Day has been selected for the Otago secondary schools rugby team, Anna-Louise Robinson has been chosen for the New Zealand Ice Ferns squad, and Kiana Pelasio has just returned from Australia, where she represented the New Zealand under-15 touch team.

The badminton team finished sixth at the national secondary schools tournament in Auckland, while also retaining the South Island trophy.

The senior A hockey team competed in the Audry Timlin competition in Christchurch. Claudia Peyroux was the top goal-scorer and captain Sophie Allison was the most valuable player.

The senior A netball finished a respectable 24th in the South Island tournament.

The senior A basketball team finished in the top six in the AA secondary schools zone four premiership in Nelson, securing a spot at the national tournament.

The senior A football team competed in Nelson. Alexandra Clark-Grant was the team's most valuable player.

Later this month, the curling team will be competing at the national secondary schools competition in Auckland.

The first XI hockey team was third at its tournament in Timaru, losing to Burnside 2-1 in the semifinal. The second XI competed in Greymouth, finishing fifth overall.

The first XI football team finished sixth in the Linwood Trophy, in Invercargill. The ice hockey team also competed in Dunedin and won the second division of this tournament.

Rory Ferguson, having played only two months of rugby league, was selected in the Otago team to play in the under-15 tournament in Greymouth. Otago was beaten in the final by a strong Canterbury side. Rory was named sportsman of the tournament and selected to represent the South Island at the national under-15 tournament.

Garth Sanders dominated the Otago-Southland intercollegiate shooting series. Garth claimed both trophies for the highest aggregate scores over all DTL events and all skeet events. He won the aggregate trophy for top DTL aggregate score over all the Otago-Southland intercollegiate events. Garth, Shane Sanders, Arthur Chapman-Cohen and Cody Sarginson were all members of the Otago team which beat Southland last weekend. The team trains under the expert eye of John Fooks.

The first XI football team, despite having quite a young side, played its way into the quarterfinals at a South Island tournament and played its best game to beat Marlborough Boys' High 1-0. It then downed Waimea College on penalties in the semifinal, before suffering a heart-breaking 2-1 loss to Rangiora College in the final, despite dominating the game.

The under-15 rugby team found the going tough against much bigger opponents but still managed to finish fifth in its tournament. It had wins over Timaru Boys' High and Marlborough Boys' High, and a close game against Nelson College.

Ice hockey showed again that it is an emerging sport with some fantastic results at the South Island tournament. King's beat John McGlashan, Dunstan, Otago Boys' and St Andrew's College on the way to the losing the final against a fine Wakatipu team.

King's had convincing wins over Scot's College (6-0) and New Plymouth Boys' (10-0), and beat Christ's in the quarterfinals. It then faced off against last year's champion, Westlake Boys', in the semifinal. King's dominated proceedings from the start, gaining an edge in the midfield through Caleb Booth, Dylan Thomas and Eli Turner. Athletic contributions from strikers Solomon Baldock, Tom Jolly and Jack Kelly gave the team some real go-forward and it scored after 15 minutes.

Westlake equalised against the run of play halfway through the second half, only to see King's score immediately after to go 2-1 up. However, Westlake was never going to give up and, despite fantastic defensive games from Jordan Ward and Malachi Buschl, it managed an equaliser with only two minutes left, taking the game into a penalty shootout. King's won the shootout 4-3.

The other semifinal also went to a penalty shootout, with Lindisfarne College prevailing. Unfortunately, the final was washed out after rain flooded the turf, forcing the match to be declared a draw, resulting in King's High School becoming joint winner of the Tanner Cup.

Dunstan High School's senior A boys basketball team recently travelled to Westport to compete in the South Island tournament for schools with fewer than 600 pupils. The competition was very strong and 12 schools entered. Dunstan won the championship for the second year in a row, beating Roncalli College 102-58 in the final. The semifinal was the crunch match, when the Dunstan boys defeated Greymouth High 57-53, after being down by almost 20 points in the first quarter.

Throughout the tournament, Dunstan's man-to-man defence and fast-break offence meant speed and fitness could be used to exhaust the opposition, who were often taller.

Dunstan now prepares for the national secondary schools championships in Palmerston North in the first week of the holidays.

The Dunstan First XV played well in the final of the South Island co-ed schools competition against Ashburton College recently. Ashburton held just a one-point lead for a large part of the game as Dunstan dominated set pieces. Dunstan missed two chances to score, and Ashburton scored two tries in the last three minutes to win 34-10.

• These articles are compiled by the Otago Secondary Schools Sports Association which is proudly sponsored by Perpetual Trust.