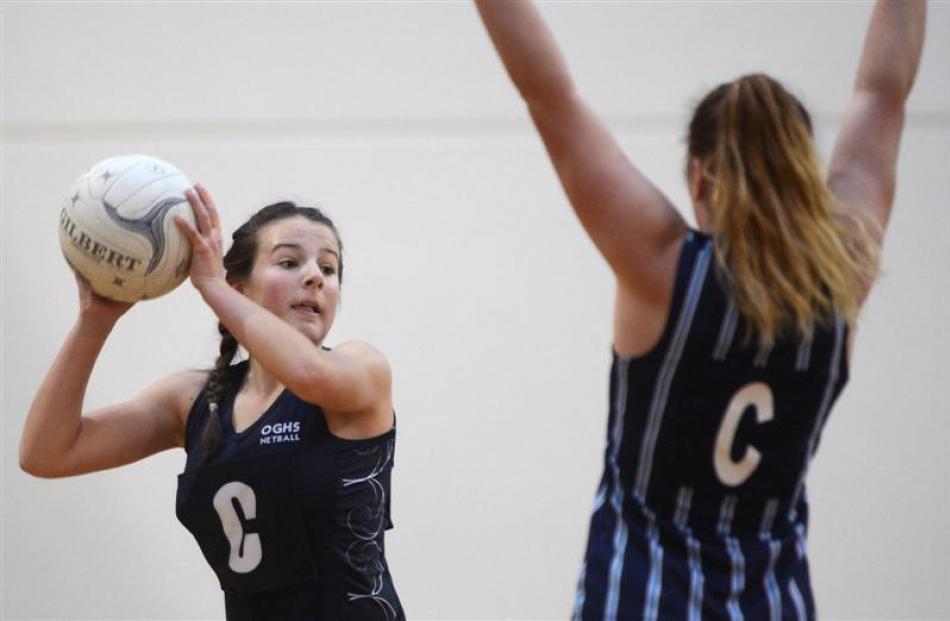 The school held its cross-country championships recently featuring many top performances, including two records being broken.

Henri Gaudin, Hamish McKinlay, Izzy Locker and Mary Locker are a young team so it was an impressive performance. Henri had the fastest individual time for the 2km run in the senior mixed relay section.

Jonty Horwell and Sean Hall will travel to Wellington for the open national indoor bowls championships this weekend.

Jonty has a national title to defend.

The Fifa Under-20 World Cup tournament has provided plenty of inspiration.

Solomon Liesbeth and Shae Moore were selected as part of the Dunedin ball crew and enjoyed attending world-class matches.

Being surrounded by professional football players at an elite level has been a once-in-a-lifetime experience for the boys, who performed professionally throughout the tournament.

Solomon, Shae and Ben Dubyk are all training with the Football Talent Centre.

Originally from Canada, Ben represented his province in Canada and is a talented goalie and part of the NZ Football Federation training squad.

Shae is in the Otago under-16 futsal training squad preparing to travel to Wellington in the school holidays.

Otago basketball rep player Jaren Roy and his Otago team have qualified for the nationals in Auckland in July.

All winter sports codes are up and running with good participation rates.

Chris Gillett was selected to be an assistant referee in a premier rugby game last weekend.

The student sports council has started an interhouse table tennis and futsal tournament which are both proving popular.

St Hilda's has been delighted with the number of girls who have participated in the weekly road race and cross-country series.

In the senior race, Anna Lindsay was second.

The next event was the Caversham King's relays in May.

Anna Lindsay had the fastest time in the senior race.

St Hilda's girls travelled to Milton to compete in the Otago-Southland cross-country relay.

The senior girls 1 team of Anna Power, Erin, Olivia and Anna Lindsay was first, and the junior 1 team of Lily Davies, Georgial, Suzi and Cecillia also won its age-group.

Georgia Heffernan and Mariah Nelson who have been selected in the under-17 Dunedin regional netball team.

Mikalya Thorn, Abbey Johnson, Aria Park, Meg Timu and Breanna Shea have been selected in the Dunedin Centre under-17 B netball team.

In April, year 12 student Kyle Rutherford, along with 38 other Dunedin BMX riders, competed at the BMXNZ nationals in Christchurch.

Kyle, competing in the highly competitive men's junior elite grade, made it through to the finals and finished fifth in New Zealand, a feat not achieved by any Otago-Southland rider for many years in this semi-professional category.

Club teams came from all over the country to compete.

Year 13 student and head boy Josh Macmillan has been selected for the Milk Cup football team.

The team will travel to Northern Ireland to compete in the prestigious tournament which will take place at the end of next month.

Otago Girls' High School has had many individual sporting achievements over the past month.

Larissa Peyroux, Charlotte Becconsall-Ryan and Mira Neuman have been selected for the under-18 southern hockey team.

Sydney Evans-Tobata, Gabrielle Pleace and Kiana Pelasio have been selected for the Otago under-17 A netball team, while Holly Paterson has been selected in the under-17 B team.

Diana Yeritsyan and Heloise Fitzpatrick are part of the curling development squad preparing for the Youth Olympics.

Jenna Thorne (first) and Taylor Thorne (second) had the top individual times at the Otago-Southland cross-country championships in Milton.

The school's junior 1 team of Jenna and Taylor, Autumn Gamble and Tahlia Roome was second and the OGHS junior 4 team of Lucy Matehaere, Chloe Bryson, Rebekah Hill and Elsa Neuman was third.

Since the last report, we have also had two major school-wide sports events which have been very successful; the swimming sports and the cross-country.

Both events were houses challenges for the first time.

It was great to see one of King's senior basketballers, Josh Aitcheson, selected to go to Nanjing, China, for the Asia-Pacific Nike NBA camp later this month.

He goes with nine other of the top under-18 players in the country to compete and train with players from Australia, China and Taipei.

This camp is attended by NBA players and coaches and is a fantastic opportunity for Josh.

Tame capped off a successful meet when Swim NZ selected him for the national age-group development training camp.

It was also great to see Felix McDonald selected by the NZ Olympic Committee for the 2015 Commonwealth Youth Games later in the year.

King's recently had the annual interschool with OBHS, which was won overall by OBHS 10-7 with great competition taking place in all events.

The feature for King's was the 2-0 win by the first XI football team which means, for the first time in 17 years, automatic qualification to this year's Lotto Premier Tournament in Nelson.

Spencer Byars is off to Northern Ireland in late July as part of the Milk Cup squad.

Louis Jennings has again been named in the national fencing team to compete in both foil and epee, in which he is ranked first and second in NZ respectively.

Cameron Moran was third overall in the 16 and under New Zealand ocean water swim series after securing a gold at Akoroa and a bronze in Auckland.

Jiacong Ruan and Martin Page have represented Otago in table tennis at the South Island championships.

Kyle Clark had a win in the Otago Golf Club champs, securing the junior knockout competition for 14.2 handicap and over.

Eight boys have been named in Otago basketball sides.

Sean Duff, Semisi Maiai, Tom Sinclair and Luke Kirkness have been selected for the under-19 team, Josh Stoddard in the under-17 team and Alex Byars, Will Edwards and Dominic Morrison in the under-15 team.

The school has just completed the senior school cross-country and five students are attending the Otago cross-country championships.

The basketball team had its first game against Lawrence Area School last week and won by one point.

It is hoping this practice will help the team when it attends the Central Otago tournament in Queenstown later this month.

Congratulations to Steve Black, Ethan Kitto and Josh Reid who have been selected for the Central Otago rugby under-14 team.

Taieri College travelled to Balclutha for the winter interchange with South Otago High School on June 1.

This fixture was a closely-fought encounter between the two schools.

There were another two fixtures that were drawn - senior A boys basketball and boys football.

The junior cross-country team competed in the Caversham road race and the Milton relay.

In second was the team of of Bailey Ferguson, Taylor Moffatt, Sam Clydesdale and Laura Bungard.

At Milton against teams from Mt Aspiring and Blue Mountain, the teams ended up second and fourth.

All of the runners are looking forward to the Otago cross-country championships.

Long Nguyen and Danya Kerr made the Otago under-15 boys and girls table tennis teams for the representative season.

The senior A girls basketball team is having its first season in A grade and is competing well, winning some good games.

The senior A netball team is having its first season in the Premier C competition.

It finished third in round 1 and is now building for the Otago secondary schools competition.

The first XV has started its season strongly.

After a loss in the opening game, the team has not looked back, winning four games in a row by playing an exciting brand of rugby.

The boys and girls A teams are looking strong once again and will be among the top teams in their respective competitions.

The boys A team was recently involved in an exciting match against ex-students of the school, eventually winning the game by a point in the dying seconds.

Hockey continues to go from strength to strength at Dunstan with the boys and girls first XI teams performing at a high level in the local competition.

In addition, the school is also fielding a second XI and a mixed team which bodes well for the future success of the sport.

Finally, netball is also in a strong position at the moment.

The senior A team is first-equal in its grade.

There are also 12 teams competing in various grades in the Central Otago competition.

• These articles are compiled by the Otago Secondary Schools Sports Association (OSSSA) which is proudly sponsored by Perpetual Guardian.