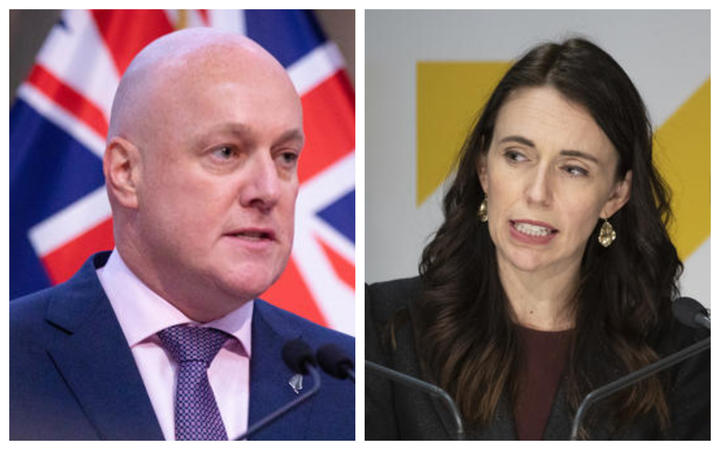 Christopher Luxon and Jacinda Ardern. Photo: RNZ
Support for Jacinda Ardern has dropped in the preferred Prime Minister stakes to her lowest result since 2017 in the first major political poll of the year.

Labour and the Prime Minister have taken a hit in the new 1News Kantar poll, but could still form a government with the Greens.

Today's poll saw Labour drop 1 point to 40 percent, while the National Party were up 4 points to 32 percent. Act has dropped three points to 11 percent, while support for the Green Party remains unchanged at 9 percent.

Under these numbers, a Labour/Greens government would be possible.

Labour would be on 51 seats on those numbers, the Greens would have 12. National would have 41 and Act, 14.

Ardern fell 4 points to 35 percent in the preferred Prime Minister question - her lowest result to date - with National leader Christopher Luxon up 13 points to 17 percent, while Act leader David Seymour's numbers fell from 11 percent to 6 percent.

Te Pāti Māori and TOP were at 2 percent, both up 1 point. NZ First was also at 2 per cent, but it had fallen 1 point.

In the previous Colmar Brunton poll in November last year, Labour was on 41 percent, National at 28, ACT got 14, the Greens with 9 percent and the Māori Party was at 1 percent.

Colmar Brunton merged with London-based data analytics firm Kantar's Australian arm in 2020, with the Colmar Brunton brand being phased out at the end of last year.

Half of people polled think the economy will get worse in the next 12 months.

The poll was released at 6pm today. It gives an early indication of whether voters approve of the Government's handling of the Covid-19 variant Omicron, and whether the summer holiday has eased the pain of last year's lockdowns and people's moods.

Luxon was elected National's leader at the end of November last year.

This is the first 1 News poll since then, but other polls last December showed an immediate lift back into the 30s for National, mainly at the Act Party's expense, The New Zealand Herald reports.

There had also been a big lift for Luxon as preferred Prime Minister - well above his predecessor Judith Collins' ratings - although he was still well short of Ardern.

Luxon has spent the start of the year touring the provinces and has been attracting large audiences at public meetings.