After almost four months of lockdown, Aucklanders are now allowed to dine at restaurants, bars and cafes. Some Auckland pubs - including Danny Doolans and HeadQuarters in the Viaduct - opened their doors at 11.59pm on Thursday.

These, and other businesses in the hospitality sector, have been mostly unable to operate under alert level restrictions since Delta plunged the city into lockdown on August 17.

As an extra incentive to get people through its doors, Danny Doolans offered a free plate of "bangers and mash" to the first people to turn up to the Irish pub overnight.

And HeadQuarters' Leo Molloy shouted patrons for the first hour that the bar was open.

"Obviously we're very pleased to be back," Molloy told The New Zealand Herald.

"Fifteen weeks and two days is too long a time. It's too long a time when you're stuck in jail. Just stuck at home on your own watching your modest fortune draining away. It's not a pleasant experience in my view, it's very unnecessary.

"Anyway, despite all the impediments they've put in front of us, we've managed to adapt and we are open so we're excited again to see people out here and actually being able to have a drink and enjoy it."

He said about 50 mainly younger patrons were at the bar at midnight, and he expected big numbers today. "Lunch bookings are very strong."

About 350 people had booked in for lunch and he expected a further 300 people as walk-ins.

Molloy cited some design flaws with the scanning process, saying it could be very slow at times.

"It's very slow, if the host phone has an impediment of any description, if it's greasy, if the light's not up right, if there's a crack in the screen, it could slow you down hugely," he told The AM Show today.

He said he had bought four devices to scan people's vaccination passes and would buy half a dozen more to try and speed up the process.

Asked if anyone without a vaccination pass tried to get in, Molloy said only one person was turned away because they had an overseas vaccination pass, which wasn't accepted.

He said if the vaccination pass scanning process couldn't be sped up, some businesses may be tempted to flout the rules and let people in without scanning.

Danny Doolans opened its doors to about 40 people - all wearing masks - with security guards patrolling the Viaduct in anticipation of an influx of patrons.

People were having their vaccine passes scanned by personnel, seemingly without any hiccups, before ordering drinks - a Long Island Iced Tea was the drink of choice for many. 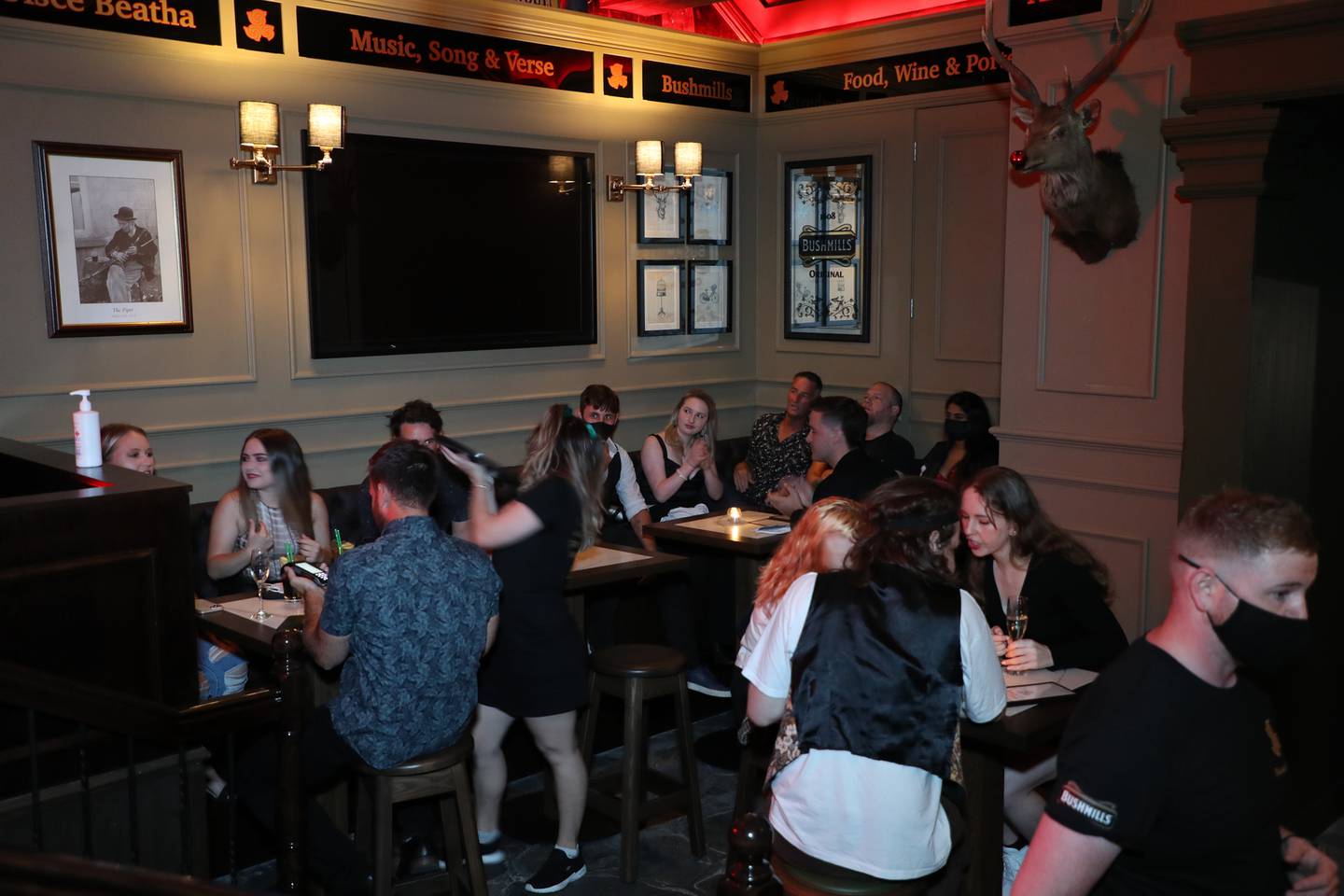 About 40 people entered Auckland pub Danny Doolans at midnight. Photo: NZ Herald
Customers received a free glass of champagne upon entry and were treated to a performance from a live band, who are yet to settle on a name but opened their set in fitting fashion - with a rendition of Stealers Wheel's Stuck in the Middle with You.

Inside, staff had their hands full keeping bargoers a metre apart. While many were wearing masks, it was proving a challenge keeping the face coverings on.

Longroom co-owner and director Richard Bagnall says they're gearing up for a big day at the Ponsonby Rd bar and eatery with at least 250 booking for today alone.

Wynyard Pavilion general manager Damien McDowell says they're fully booked all weekend. He says they've lost Christmas parties and local businesses aren't back yet - but they are grateful to be opening regardless.

In the red setting, masks are required on flights, public transport, taxis, retail, public venues and recommended if leaving the house. Public facilities are allowed to open with up to 100 people and 1m distancing.

However, public venues such as hospitality and gyms are only allowed for the vaccinated. If a vaccination certificate is not used hospitality must be contactless and gatherings are up to 25 people.

Most of the rest of the country - aside from parts of Northland, Bay of Plenty and the East Cape - will also be enjoying a return to certain freedoms, with gathering limits lifted for the vaccinated in orange regions.

As the hospitality industry gears up for a busy weekend, Restaurant Association chief executive Marisa Bidois said 60 percent of its members reported their businesses were not currently fully staffed.

"On average they are understaffed by just over 20 percent. Ninety-two percent of members recruiting for senior roles said they are finding it difficult," Bidois said.

"Our industry has been reliant on an overseas workforce that is now unavailable to us."

And away from the hospitality scene, Aucklanders have also wasted no time in indulging in some big-screen thrills that they've been denied for months.

Top of the list for movie fans was the first chance to see the new James Bond film No Time To Die.

In a nice touch, Takapuna's Monterey Cinema opened at double-O-seven - or seven minutes past midnight.

There was capacity for 50 people - and 41 seats were filled.