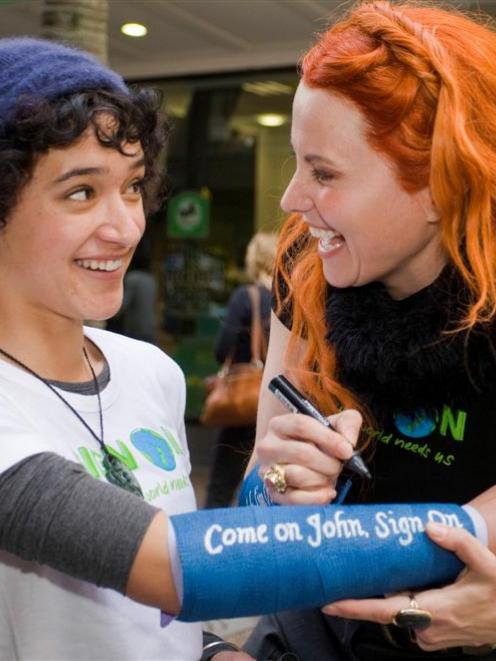 The cast, which had the slogan, "Come on John, Sign On" written across it, aims to urge the Government to adopt a 40 percent emissions reduction target by 2020.

The Sign On campaign has already attracted nearly 100,000 supporters in three months, and Waitakere Mayor Bob Harvey and climate scientist Jim Salinger were among the people who helped raise the campaign's profile today.

Passers-by in Auckland's Vulcan Lane were invited to sign the arm casts, which will then be worn at events in the lead-up to the Copenhagen climate summit in December.

"John Key may think that by announcing a conditional target of 10 to 20 percent the issue is done and dusted. I think he'll find quite the opposite as we get closer to Copenhagen. After all it's only New Zealand's initial offer in the negotiations," Mr Boxer said.

"100,000 Kiwis have already signed on to 40 percent by 2020 and John Key needs to listen. A government belongs to its people - not the other way round," Ms Lawless said.

Campaigners held a banner which read, "Join the cast of thousands" to encourage people to sign on to the campaign.

Castle-Hughes said it was all about creating a public mandate for Mr Key to "do the right thing".

"We are not saying it's going to be easy, and we do not envy him being the one who has to make the hard call. But the science is clear and the time is right. It's now or never," she said.

According to Greenpeace, the most recent science assessments state that a 40 percent reduction of greenhouse gas emissions by 2020 on 1990 levels for the developed world is essential to give the planet a 50/50 chance of avoiding runaway climate change.