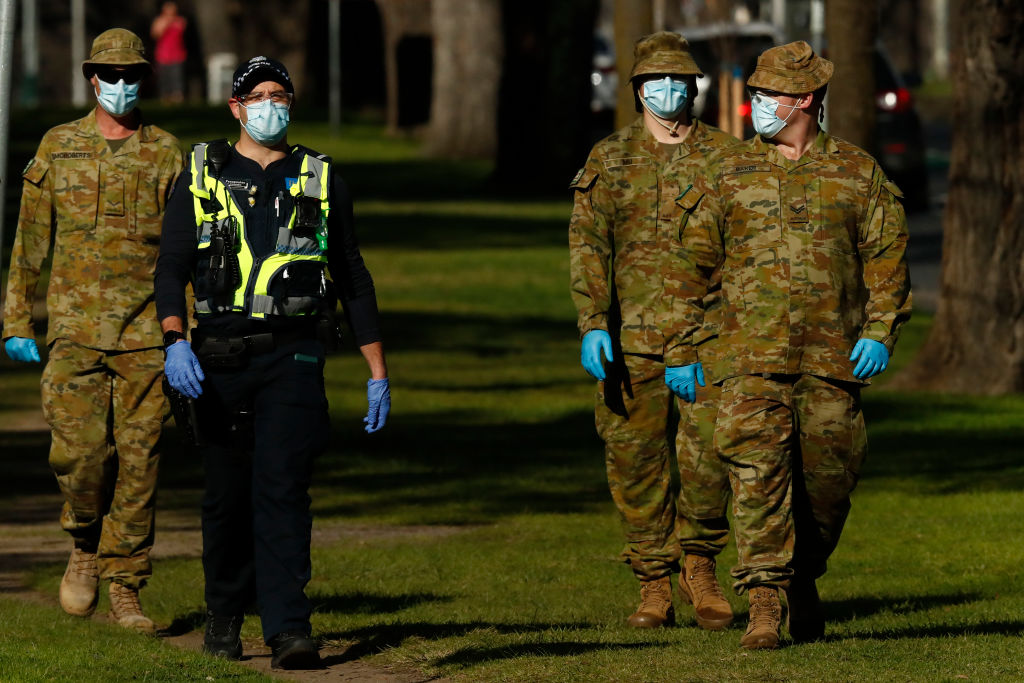 Police and Australian Defence Force members patrol the streets of Melbourne. Photo: Getty
Victoria is bringing in tough new measures in Melbourne to curb the spread of Covid-19, including a curfew and the requirement to wear masks. An expert says the NZ government could do the same if needed.

Otago University law professor Andrew Geddis said Victoria's level 4 lockdown isn't actually as strict as New Zealand's was but the government now has the powers to enact more specific controls on the population.

He said New Zealand's law "undoubtedly" could require people to wear masks if the government mandated it.

"Under the Health Act, it wasn't clear there was a power available to the Director-General of Health to order masks. You can order people to isolate and so on, but there was no specific power to say 'and wear PPE or masks'.

The new legislation has what's called a section 11 order which, if people fail to comply with rules, it can be prosecuted as an offence.

"People who escape quarantine are being charged with breaching section 11 orders. The same thing would apply if the order said you must wear a mask and you don't."

Part of that power means police can fine people up to $300 on the spot rather than drag it through the courts.

Geddis said Melbourne somewhat "fudged" their first lockdown by not having clear rules around leaving the house, which is why they've introduced a curfew this time around.

"With New Zealand, because we're much tighter on lockdown and there's so few reasons for being outside, no one was going out at night anyway.

He said that New Zealanders were relatively compliant with the first lockdown but they might find it harder to do it a second time around if the need arose.

"That's our best defence rather than saying 'oh we could always do this over again' because people might not."

Geddis said the act requires a proportionate response to the threat of Covid spread so it'd be very unlikely for the country to shutdown if a case showed up in one area or region. Instead, the act is specifically designed to be able to shutdown highly localised areas.

He said that, while iwi roadblocks stretched the law, police went to great measures to keep them within legality.

"[They] recognised that this virus is such a huge threat to Māori, and Māori have such an experience with the influenza epidemic that killed so many, that Māori have a particular key role in protecting themselves and their people.

I seem to remember, about 60 days ago while we were still on Level 3, there were a lot of idiots calling for the Govt to open up the country immediately. They were all pointing to Australia and saying look at how much better they're doing, the NZ Govt is acting like fascists and needs to follow Australia's example. Remember that?
Where are those morons now? Hopefully getting an education on how pandemics work. If the Govt had acceded to their demands, we'd be in the same boat as Victoria.
The public health officials advising the Govt in New Zealand are clearly among the best in the world. Our Govt, thankfully, has the sense to follow their sound advice and not bend to ignorance and fear.
The Opposition lost a golden opportunity back at the beginning of the pandemic. They chose not to throw their lot in with the Govt and provide full support for the path it chose. Now they're paying the price. Total lack of vision.

I agree with them, it is like a fascist police state. I think everyone that agrees with the level 4 lockdowns or new extent of the lockdowns (enforced masks, curfews) is very brainwashed or gullible and far too acquiescent.
People die. Elderly people with pre-existing major illnesses also die of flu and the cold in the same or similar numbers. That's life. Hard to say anything that someone wont find offensive or that will not need censoring because it does not comply with the group-think story we are given.

Welcome to the thin end of the wedge.