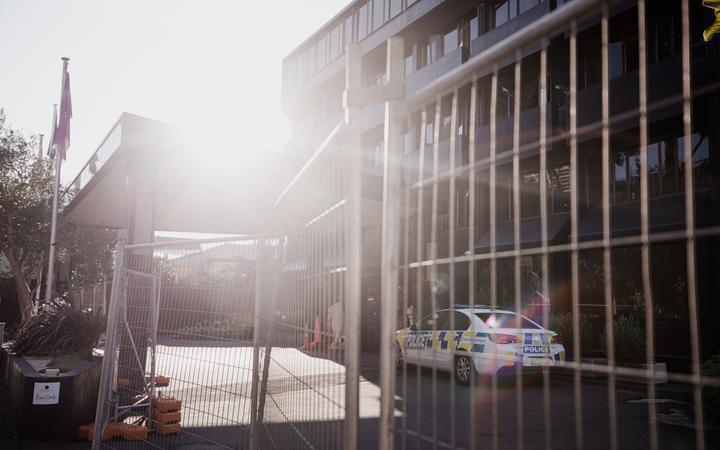 Police at the Grand Mercure Hotel in Wellington, which is being used as a managed isolation facility. Photo: RNZ
A legal academic says the Ministry of Health appears unsure if a "blanket ban" on compassionate exemptions from managed isolation is legal.

A High Court Judge questioned the legality of the ban after a returning New Zealander was denied the chance to say goodbye to his dying father, and mounted a legal challenge.

On June 16, the government temporarily suspended all compassionate exemptions, meaning anyone in managed isolation or quarantine would not be allowed out for any "compassionate" reason, such as a relative being close to death.

People could be moved for other reasons, including medical issues.

Graeme Hattie was returning to New Zealand to see his ill father, when four days into his managed isolation, was told his dad had only a short time to live. He applied for early release on compassionate grounds and was rejected twice.

He mounted a legal challenge but before it could be heard his father died.

However, it did result in a judge's minute.

Justice Muir noted it was his provisional view that the blanket ban on compassionate leave appeared "inconsistent" with the Covid-19 Public Health Response (Air Border) Order 2020, and there was an urgent need for the Director-General of Health to review the terms of the blanket ban.

A statement from the Ministry of Health said it did in fact individually consider the man's application, and did not use the suspension as the reason for declining Hattie being allowed to visit his father.

"The Ministry acknowledges the Hattie family's loss at this very sad time. We respect this week's remarks from the court. The Ministry did actively consider Hattie's application and did not rely on the suspension when considering the request from his legal team," a spokesperson said.

"This period represents a temporary suspension of compassionate exemptions while appropriate policy and processes are worked through."

'A bit of uncertainty'

Otago University senior law lecturer Simon Connell said the Ministry of Health's statement appeared to show it was not very confident that total ban is lawful.

"If they thought that they were on solid ground legally, they would point to [the suspension] as their basis for declining the request. But that's not what they did - they said they 'actively considered' the application, that is they made an individual assessment, which is what they ought to be doing in all cases," Connell said.

"As the judge describes it, the purportedly blanket suspension appears not to be effective in law.

Connell said there was some room for argument for what would define an "exceptional circumstance", as it is worded in the legislation.

"The original order specifically mentions compassionate grounds, and the more recent one only refers to exceptional circumstances. So there is a bit of uncertainty as to what qualifies as an exceptional reason. But I think there is a good case that visiting a dying relative, when things are very time-sensitive, is the sort of exceptional reason that might justify an exemption."

How legal is it to expose the people of this country to another round of the virus.

Quoting: " ..you can't have it both ways..." It appears the Government has passed a law which can be interpreted one way by government officials when it suits them and in directly the opposite way when that suits them. If this is the case, why bother with a law at all? Just openly acknowledge that the government (state) is seizing the arbitrary power of a dictator on this issue i.e whether an individual may be permitted to leave quarantine or not. So if anyone asks why or why not, the answer is 'because we say so.'

I see no reason to allow any exemption from quarantine provisions at all.
Most of these NZers are returning from long periods of overseas living. Most left NZ because of the attraction of higher earnings overseas and have not paid any tax into the NZ consolidated fund over the entire period they've been away. They are returning because the country they chose to live in is infested with Covid19 and/or they are not entitled to welfare support. A brief quarantine is a small price to pay for being able to return "home". I don't care what their sob story is, If they want to be selfish and potentially endanger the entire country then I say the team of 5 million who made the sacrifices to keep the country basically Covid19 free can be selfish as well with complete justification.