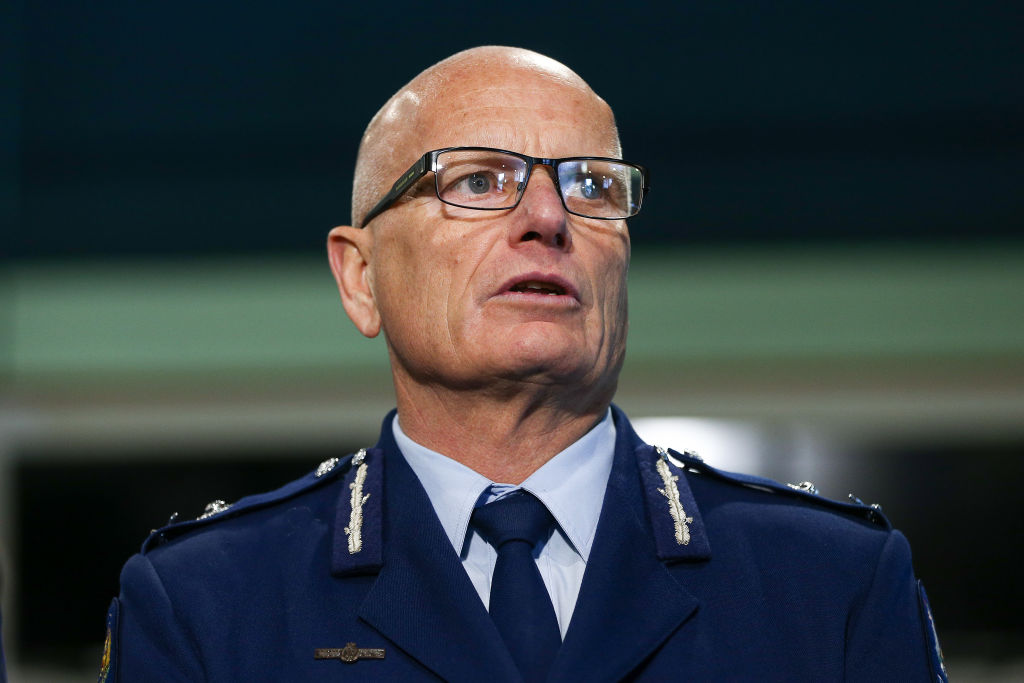 Police Deputy Commissioner Mike Clement has defended the cautious decision to further delay the retrieval operation. Photo: Getty Images
The risk of a further eruption on White Island stands at 40-60 percent and police insist it remains too dangerous to collect the eight bodies on the volcano.

Despite mounting frustration amongst the families and friends of the victims of Monday's eruption, police today said the risk was too great to attempt any recovery

Speaking to press this morning, Police Deputy Commissioner Mike Clement defended the cautious decision to further delay the retrieval operation - he says officers are determined to return the victims to loved ones but not at the expense of rescuers' safety.

Clement was speaking after news that two more people had died in hospital overnight, bringing the official death toll to eight.

He said police and agencies involved were all equally committed to retrieving the bodies on the island.

Clement said police may consider seeking consent from the victims' next of kin about whether they would be happy for recovery teams to go in to quickly recover the bodies, even if this meant losing evidence required to formally identify each person.

Meanwhile, Police Minister Stuart Nash this afternoon had a meeting with families who have lost loved ones on White Island and later acknowledged communication must improve.

"I have heard loud and clear that so far the communication has not met the expectation of the families and we are rectifying that," he told media in Whakatane.

Clement also attended the meeting and said a "very honest conversation" took place with the families.

Nash said he understood their frustration and Clement had assured them they would be kept better informed.

As the wait for the recovery goes on, police will meet local tour operators this afternoon to reassess the current risks posed to the recovery team.

Clement acknowledged the grieving communities in New Zealand and overseas, and praised the pilots who helped rescue survivors from the island.

He said he was full of admiration of what they did, and they are heroes, but they made the right call to come off the island.

Police announced the most recent deaths in a statement this morning.

One was being treated at Middlemore Hospital and one at Waikato Hospital.

He was travelling with Karla Mathews, 32 and her partner Richard Elzer, who are still missing on White Island and presumed dead.

The two new fatalities come on top of six earlier confirmed deaths from the fatal blast.

These are Gavin Dallow and his stepdaughter Zoe Hosking, Whakatāne local and tour guide Hayden Marshall-Inman, an unnamed Malaysian tourist, and Brisbane mother Julie Richards, 47, and her 20-year-old daughter Jessica.

Meanwhile, a request from Mr Marshall-Inman's brother to recover the tour guide's body from Whakaari/White Island himself has been turned down by the police minister.

Mark Inman wants to fly to the island and bring home the body of his brother, and has sent a letter to the Prime Minister asking permission.

Police Minister Stuart Nash says the government would not be offering permission for private recovery operations.

Mr Nash said he understood the frustration of families, but scientists say it is not safe to return to Whakaari, and when it is the bodies of the eight people left on the island will be recovered.

"The environment on the island has changed, we won't be giving anyone a pardon. the last thing we want to do is to have further causalities in what is already a significant tragedy," he said.

"We will not give anyone permission to go to the island [right now]."

Mr Nash said there were still people in hospital who still could not be identified and for that reason officials did not know who remained on the island and who had survived.

"My understanding is that there are people in hospital who are so severely injured that they are unable to communicate."

Police say Ngāti Awa will lead the recovery of bodies from Whakaari/ White Island once it is deemed safe to retrieve them.

When the bodies, or tupapaku, are recovered they will be placed on a navy ship and taken to the coroner in Auckland.

"[Whānau] are distressed and that is, in fact, our highest priority - families of the injured tourists. And we've had a number of support meetings with our staff and put in additional supporting arrangements. They know that we are here for them."

"The families of the deceased staff are anxious to get their loved ones back. We feel for them and manaaki them. But the reality is that we are in the hands of the officials and the police and there's very little we can do.

"I don't think it's appropriate for me to express frustration, that doesn't help the situation particularly with my staff most importantly, but also doesn't help the officials and the reality is we are bound to follow their instructions ... that's not to say in any subsequent review we won't contribute and make some suggestions and recommendations - I have a whole list in fact."

He said there were lessons from these experiences, even in retraction of saying the investigation would be a "criminal" one.

"The impact of that statement on our staff was horrendous. Simply because they didn't know what that meant.

"When you say there are criminal investigations into White Island tours, there are certain implications. The staff did not understand that, it was important that they understand that. Putting out a premature statement is a learning."