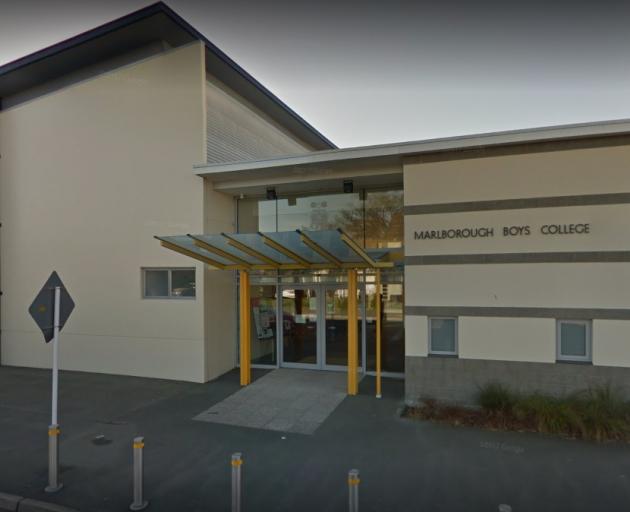 Oranga Tamariki and police are investigating a serious complaint relating to the conduct of a teacher at Marlborough Boys' College. Photo: Google Maps
The Education Minister is calling for an urgent briefing into serious allegations involving a teacher and students at a Blenheim high school.

Police and Oranga Tamariki are speaking with students alleged to be directly affected by "sensitive and serious conduct" allegations involving a teacher at Marlborough Boys' College.

The Herald understands the allegations involve a female teacher and multiple pupils.

Marlborough Boys' College board of trustees has confirmed a staff member is on leave while an investigation involving police and Oranga Tamariki is carried out.
In a letter sent to the school's parents and caregivers on Friday, principal Wayne Hegarty and board chairman Sturrock Saunders said they wanted to update the school community about a "sensitive matter" following concerns being raised about the conduct of a teacher at the school.

"As the matter was serious and needed to be worked through carefully, we immediately sought advice from the Ministry of Education and New Zealand School Trustees Association," the letter said.

"Oranga Tamariki and police are investigating and have made contact with those directly impacted."

The school was now acting in a liaison and support role, as well as managing its own employment process.

The school was aware it was "disconcerting" for its school community and said its key priority had been "to support and protect the privacy of any students affected by this matter and liaise with these students and families in the first instance".

It was also being careful not to "prejudice or pre-empt any official processes".

"We do hope that you also trust that we are doing everything that is needed at this time and comfortable that we will update you as we can, but this may not be for some time as it will depend on the processed being worked through by the agencies involved," the letter concluded.

Saunders confirmed in a statement that the school was working through a matter relating to a staff member.

As well as referring the matter to the police and Oranga Tamariki, it was also liaising with the School Trustees Association and the ministry to make sure the matter was handled "in line with best practice", he said.

"We can confirm the staff member concerned is on leave while the matter is worked through.

He said it would not be appropriate to comment further.

Asked to comment on the situation tonight, a spokesman for Minister of Education Chris Hipkins said he had called for an urgent update.

Hipkins had been informed of the allegations and the ministry's response to date.

"He can't comment any further but has asked for a briefing urgently tomorrow."

In a statement provided to media, Ministry of Education enablement and support deputy secretary Katrina Casey said the ministry was aware of the allegation and could offer support and guidance to Marlborough Boys' College if needed.

"We understand the allegation has been referred to police and Oranga Tamariki."

NZ Police said it was unable to respond to queries which seek to establish whether specific individuals or organisations are, or have been, under police investigation.