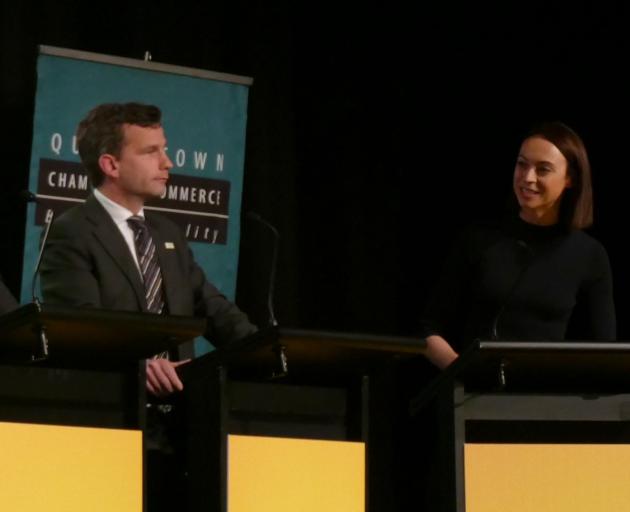 ACT leader David Seymour, and MC Tova O'Brien. PHOTO: TRACEY ROXBURGH
Queenstown is right in the middle of one of the safest National electorates in the country, and few political leaders find their way there during campaign season.

That is a shame because Queenstown faces many pressing issues, some with a flavour unique to the region but many which are like a mini case study of pressure+s the rest of New Zealand is starting to face.

Tourism is flatlining, Covid-19 has ravaged the local economy and the local landscape is under threat both from intensive agriculture and climate change.

The former lakeside village is now a booming town with massive strains on housing and infrastructure, as well as education and health services.

Find a formula to sort Queenstown’s woes and arguably you are a long way to figuring out how to fix up the rest of the country.

There is an exception to Queenstown’s low electoral profile, and that is the annual debate it hosts between the finance spokesmen of the main parties — a gender balance issue compere, central Otago export and Newshub political editor Tova O'Brien noted. 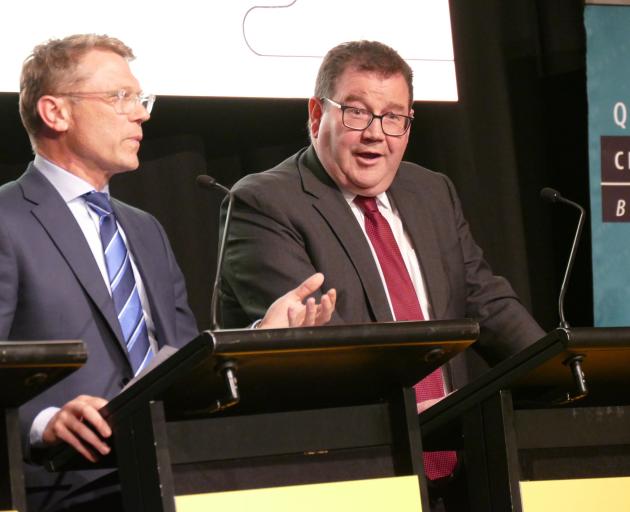 Traditionally a raucous, gloves-off affair, the 2020 version delivered much more entertainment than the televised leaders’ debate at the same time — of which Labour’s Grant Robertson gave a spoiler alert: "John Campbell is talking a lot."

Act received 40 party votes in Queenstown and Arrowtown in 2017 and all those people must have been in the 400-capacity hall on Monday night, because Mr Seymour clearly received the most enthusiastic response.

Feisty throughout, Mr Seymour served it up to both Mr Robertson and his potential coalition partner Mr Goldsmith, labelling the former a spendaholic, faulting the mathematics of the latter, and then saying it was a tough job for him coming up with policies for both parties but he was prepared to do it.

Mr Robertson fared as well as could be expected in this bluest of blue seats, getting a big round of applause for calling out an audience member who wore a "Make Ardern Go Away" hat.

The stickiest moments for Mr Robertson came when he was quizzed on the selective nature of support for tourism operators, in a town where there have clearly been haves and have nots, and the availability of visa workers — the Government announcement earlier that day by his colleague Kris Faafoi on the easing of some restrictions came just in time on that score.

Mr Goldsmith, still battling the embarrassment of the irritating mistake of the miscalculations in National’s economic and fiscal plan, gallantly tried to bat away that issue and go on the attack against Labour’s policies.

He made more of the free fees policy and KiwiBuild — both far from shining examples of Government policy — than his leader did at the same time, but his message that National would give people more freedom to spend their own money sounded flatter than you would expect given he should have been preaching to the faithful.

NZ First deputy leader Fletcher Tabuteau stood in ably for his leader Winston Peters, who was in his Northland heartland desperately trying to scare up 5% of the party vote after another poll putting the party at 2%.

Mr Tabuteau had one joke (it was not a very good one) and one main policy to push — the Provincial Growth Fund, which has already sent a few million to Queenstown and with more to come.

His basic argument was pork barrel politics, with an added twist of claiming NZ First was what stood between the other governing parties and the introduction of a capital gains tax.

Queenstown was a quietly fruitful source of party votes for the Greens last time, and Mr Shaw’s attempt to demonstrate just how solid and sensible he was seemed to go down well.

"We need to plan for the future," was his catchcry and he seemed to actually mean it, more perhaps than other parties who have put the "f" word in their party slogan.

It is difficult to claim a win in a multi-party debate like this, but it is all too easy to come away a loser.

No-one really came a cropper but Mr Seymour, riding the wave of an opinion poll that night which put Act’s support at its highest in 17 years, would certainly have walked away feeling he had more momentum than some of his rivals.

The odd one out

Act leader David Seymour took his bus for a spin through the South last weekend, and Winston Peters has also rumbled through in NZ First’s Back Your Future-mobile.

Labour leader Jacinda Ardern was here the other Monday, and expect her to be back again before the election campaign is over.

Advance Party leader Billy Te Kahika is in Dunedin tomorrow and the leaders of the New Conservatives and The Opportunities Party, among others, have spent time in the South.

There’s a glaring omission there ... but National promises Judith Collins is on her way soon.

No surprises there, Seymour is the only MP actualky working to help new zealanders. The nats are working for the wealthy, labour is working to get every kiwi reliant on their goverment handouts and winnie is working for himself. And the greens are misguided nutters. Seymour has integrity and the other parties could learn a lot from him.

Any one considering voting for ACT needs to have a look at the first half dozen candidates they have on their list. I mean Seymour is there and is a well experienced politician, a known quantity. But the next 5... well... have a look... they are a little different.

It is very easy to behave like this is business as usual. It is not. There is a world wide pandemic running rampant and the world economy is heading for the dungeon. The Labour led government has been at the forefront in dealing with it since March. Exactly what has David Seymour contributed except criticism. Provide an answer that does not involve leaving our country in the hands of a private commercial company because we all saw how well security at the managed isolation worked under private business control. Where is this silver bullet Act?