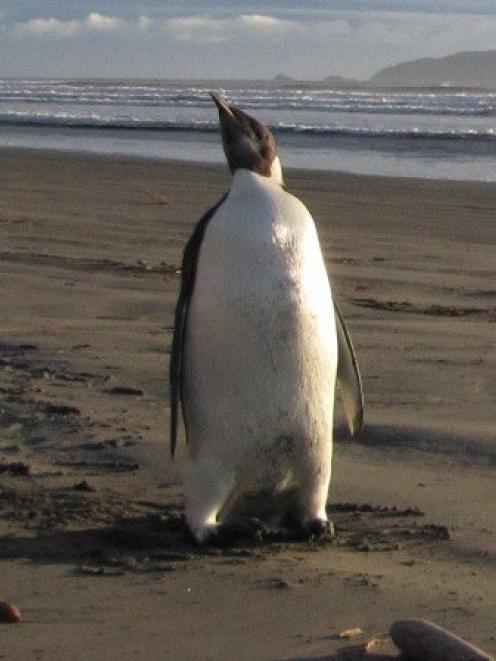 Happy Feet
A "stroppy'' Happy Feet most likely pulled the transmitter off himself, says a former carer.

Wellington Zoo vet Lisa Argilla, the main carer for the emperor penguin on his boat ride to being released, is sure that a petulant Happy Feet pecked away at the transmitter until it fell off.

"I think Happy Feet, who was definitely Mr Stroppy Feet towards the end of his journey, was determined to get the offending object off and I believe he succeeded! I saw him paying a lot of attention to preening the area where the transmitter was attached,'' she wrote on her blog.

"He has a mind of his own about things that bird.''

The emperor penguin was found sick on the Kapiti Coast after eating sticks and sand and received two months of specialist care with multiple operations before he was given the medical all clear to return to his mates.

Happy feet had been fitted with a satellite transmitter from animal tracking company Sirtrack so his followers could track his progress after being released from NIWA vessel Tangaroa.

The electronic device stopped sending a signal on Friday two weeks ago, sending many fans into a flurry about his possible demise.

He had travelled 115km in a southeasterly direction after being released into the Southern Ocean near Campbell Island.

Dr Argilla said it had been an interesting week aboard the ship after setting the "dear buddy'' free.

"However, everyone aboard is positive that he is OK and that the transmitter fell off. It's not easy applying transmitters to animals in a way that it causes the least disruption to the animal's natural behaviour.''

The transmitter had been attached to the emperor penguin's feathers with superglue, and had been expected to fall off with his malted feathers next year.

She said the crew were hoping for the best while they continued on the rest of a month-long research voyage.

"I believe he is alive and well and am hopeful that one day in the future his microchip will alert us all to the fact that he has returned to Antarctica to find a mate.''