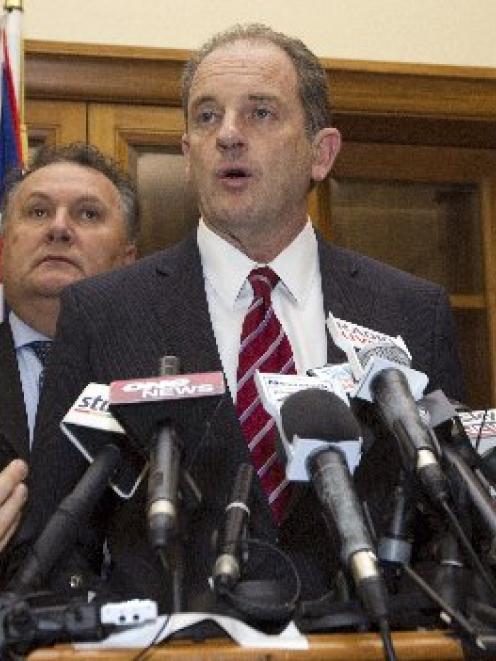 David Shearer announces at Parliament yesterday his decision to stand down as leader of the Labour Party. Photo by NZ Herald.
The Labour Party caucus may have to swallow its collective pride and support David Cunliffe as the next party leader as the MPs consider how to save their jobs at the 2014 general election.

University of Otago political scientist Bryce Edwards is convinced David Cunliffe will be the next leader, with current deputy leader Grant Robertson retaining that role.

David Shearer announced yesterday he was resigning as Labour leader after 20 months in the job.

''It has been a challenging time off the back of the 2011 election result.

"We have rebuilt and reformed the party and, under my leadership, we have released a number of significant policies to improve peoples' lives,'' he said in a statement.

Messrs Shearer and Cunliffe challenged for the leadership after Phil Goff announced his resignation in November, 2011.

Mr Shearer was unanimously endorsed as leader and Mr Cunliffe was eventually pushed to the backbenches after being seen as disloyal to him.

The decision on leader needs to be made swiftly - preferably before its national conference, which starts on November 1 - with Labour continuing to languish in the polls.

Mr Cunliffe was understood to be consulting widely with family and colleagues as he weighs up his options.

He preferred people to come to him with an offer so he could dictate the terms of taking on the job, the Otago Daily Times was told.

Shane Jones and Andrew Little will also be consulting various factions of the party, but are unlikely to get enough support.

There is an ABC (Anybody But Cunliffe) faction in Labour, but Dr Edwards believes his time has come.

A Cunliffe-Robertson ticket would bring two major factions of the party together in a show of unity before the next election.

''Cunliffe has a strong profile and has proved himself as an excellent minister.

"One big lesson to be learnt from Shearer's appointment is you don't put someone in who is a newbie in Parliament. They need to be in there for a few years.''

That would rule out Mr Robertson, who, despite being around politics for a long time, was relatively new to Parliament, Dr Edwards said.

In the past, former prime minister Mike Moore was elected at the last minute before the 1990 election to try to stem the bleeding of Labour's support.

In Australia, Labor recently re-elected Kevin Rudd as prime minister to try to save seats.

Dr Edwards said those in the Labour caucus who did not like Mr Cunliffe, and there were many, would need to weigh up their options and would find the experienced MP was the best bet.

Mr Cunliffe was a strong campaigner with a solid platform of policy and experience.

Having Mr Cunliffe lead Labour to the next election would suit Mr Robertson, who wanted to be leader and prime minister but was not yet ready, he said.

Mr Cunliffe needed to take his chance now. If he left it until the next election, there was a chance Labour and the Greens could win and he would lose his opportunity to lead the party.

''Grant Robertson has the ability to play the longer game. He wins either way.

"He is the person best placed to be either takeover leader if Labour loses at the next election or be deputy prime minister.''

Labour MPs contacted by the ODT yesterday would not speak on the record, but said Mr Shearer's decision came as a surprise.

Staff were not told until just before the announcement and would now face an uncertain future.

It was the prerogative of the leader to choose his or her staff.