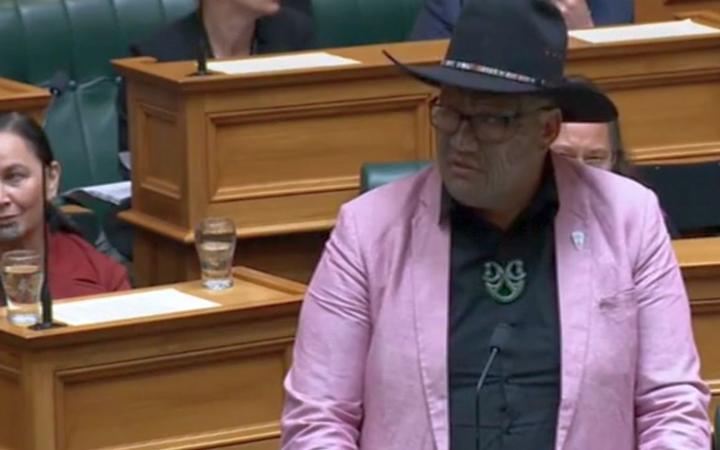 Rawiri Waititi in Parliament, before getting kicked out of the House for doing a haka. Photo: Parliament TV
As a rule of thumb, authors of government reports don't really expect to be catapulted into the headlines a year-and-a-half after submitting their work.

But over the past couple of weeks the storm around He Puapua - a report commissioned by Te Puni Kōkiri and written over a two-month period in 2019 - has dominated political discussion.

Opposition leader Judith Collins has repeatedly claimed the report is an attempt by the government to implement 'separatism by stealth'.

The sentiment so enraged the Maori Party's Rawiri Waititi that he performed an impromptu haka in the House, resulting in him and co-leader Debbie Ngarewa-Packer being kicked out for the day.

So what is the background to He Puapua? What are its recommendations, what obligations does the government have in implementing them?

And why is the report only coming to light now?

Today on RNZ's The Detail, Emile Donovan spoke to Dr Claire Charters - a constitutional scholar who was one of the authors of the report, to clarify exactly what actually is.

In 2007, the United Nations issued a Declaration on the Rights of Indigenous people.

One-hundred-and- forty-four countries voted in favour of the declaration; four voted against.

The dissenters were the USA, Australia, Canada, and New Zealand.

The Declaration is vague and idealistic, as UN declarations tend to be, as they apply to many countries with many indigenous populations which have their own grievances and goals.

But New Zealand's concerns weren't meritless: the government felt some of the articles contained in the Declaration directly contradicted our laws.

For example, Article 26 states that "Indigenous peoples have the right to the lands, territories and resources which they have traditionally owned, occupied or otherwise used or acquired".

Then-Māori Affairs minister Parekura Horomia said this would collide with the fact that many lands traditionally occupied by Māori were now owned, lawfully, by other people - both Māori and non-Māori.

However, by 2010 the Canadians and Australians had performed an about-turn and joined the Declaration, with the USA signalling they would do the same; faced with being the only country in the world to oppose it, Aotearoa decided to join up as well.

Eight years later, we had a plan: Te Puni Kōkiri (the Ministry of Māori Development) commissioned a working group to write a document, outlining how we could give effect to the UN principles we had signed up to.

That document is He Puapua.

Dr Claire Charters from the University of Auckland is one of the authors of the report.

"Essentially [the remit] was to come up with some sort of plan, or guidance to the government about what a plan of action might look like to realise the action.

"Part of that was: what would engagement look like on this? It certainly was not to say: 'this is what it must look like', but to provide a line of sight about how you might achieve compliance with these rights."

Some of the ideas in He Puapua are extremely ambitious - establishing an upper house of parliament, for example, or establishing separate Māori courts. Many political or constitutional commentators would say they're unlikely to ever be enacted.

However, others are already part of public discussion, such as the compulsory teaching of te reo Māori in schools, or extending to prisoners the right to vote.

Others, like permanently establishing Māori wards on local councils and establishing a separate Māori health authority, are already in train.

Charters says a narrative has emerged around He Puapua that it's essentially government policy being introduced on the sly - which is wholly inaccurate.

"It's not government policy ... that's not our role. We're an independent working group, to provide ideas and advice.

"What's really important, and what was important to us, was that these are ideas, that we think would realise the Declaration - but none of this can happen until you have Māori support, and a national conversation about this.

"It's not for an independent working group to decide concretely what this looks like."

The government should shoulder some blame for this misrepresentation too, Charters says.

It had the chance to proactively release the report - and while the Covid-19 pandemic understandably caused a lot of attention and resource to be diverted, much of the farrago could have been avoided by doing so.

She says fears that He Puapua advocates for a zero-sum shifting of power from Pakeha to Māori are misplaced.

"The report - and also us, as authors - were really motivated by unity, rather than division. By this idea that to have a successful and flourishing Aotearoa New Zealand, we need to recognise our founding constitutional document, and that Māori are failing in this system.

"And, until there's equality for Māori, it will be very difficult to have a unified state."