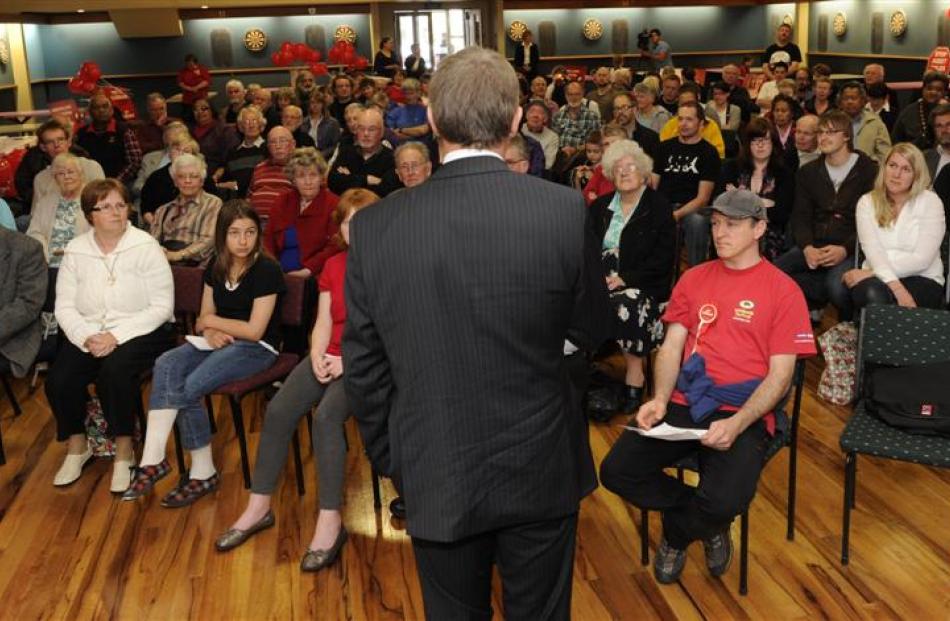 Phil Goff takes his message to a meeting at the South Dunedin Community Hall yesterday. Photo by Craig Baxter.

South Dunedin put on a hero's welcome for Phil Goff yesterday, with standing ovations and regular choruses of approval for his pronouncements.

The Opposition leader may have left wishing the rest of the country expressed the sentiments of the Labour stronghold, as he made a flying visit to Dunedin yesterday.

Dunedin South MP Clare Curran told the 150 people at the South Dunedin Community Hall about the "new poor" - working people who struggled to get by, before introducing her leader with the words: "I bring you Phil Goff and his message."

That message, which Mr Goff introduced at the Meridian Mall in George St, his firststop, and reiterated at each stop as he travelled around Dunedin, came down to the major policy platforms Labour is pushing.

An end to the idea of asset sales heads the list, as Mr Goff tries to make the most of the less than two weeks he has to overhaul National's significant lead in the polls.

He promised free healthcare "24-7" for children under 6, so no parent would have to worry they could not afford healthcare because of high after-hours costs.

Removing tax from the first $5000 of earnings would add $525 a year to hip pockets, and the minimum wage would be raised to $15 an hour, a policy that proved popular with the South Dunedin audience.

But the first job for a Labour government would be to "stop asset sales in their tracks", Mr Goff said.

Government assets returned millions of dollars a year to the country, he said.

"Why the hell are they flogging them off?"