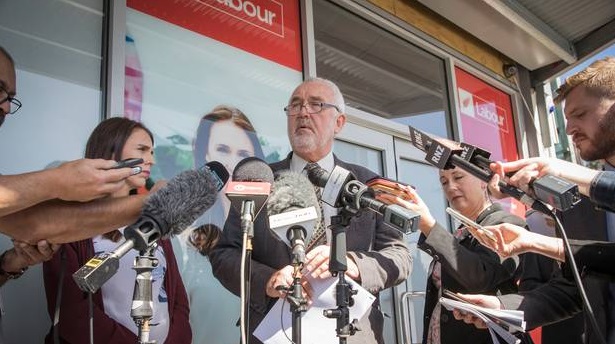 Labour Party president Nigel Haworth has declined to comment on the investigation while it's under appeal. Photo: NZ Herald
Warning: This article contains graphic information.

A 19-year-old Labour volunteer has reportedly described in graphic detail an alleged, prolonged sexual assault by a party staffer, saying he pinned her down and attacked her during a meeting at his home.

Seven formal complaints were laid with the party about a male staffer, but in March the Labour Party decided to take no disciplinary action after an investigation.

The party says no allegations it looked into during that process related to sexual assault because it was not the proper body to do so - but a complainant says she raised the alleged sexual assault during the investigation, according to The Spinoff website.

Following reports members of the party had resigned over the investigation and contact with media, Labour last month said it would allow the complainants to appeal.

One complainant has told The Spinoff that, after being invited to a meeting at the staffer's home in early 2018 to discuss an upcoming regional conference, he had begun to grope her, before holding her across the collarbone when she tried to push him off.

She said he then pulled her off her chair and pinned her to the floor before pulling down her underwear and sexually assaulting her.

"I was just in total disbelief, struggling a lot and still trying to bang on the floor," she told The Spinoff.

"I just wanted someone to come upstairs. Anyone."

The woman said the attack had lasted 10 to 20 minutes. She had not gone to police because of the difficulties and experiences of others who had gone through that process.

In a statement to The Spinoff, Labour Party president Nigel Haworth said none of the complaints that had been investigated related to sexual assault.

"The person leading the original review made it clear to the complainants that the party would never be the appropriate body to handle allegations of that nature and that they would need to be investigated by the police," he said.

Haworth has been contacted by the Herald for comment.

Request for comment was also put to the staffer's lawyers.

The complainant told The Spinoff that while she had initially reported a "lower-level" incident about the staffer allegedly grabbing her during at party in 2017, she had later read out her notes to the panel hearing complaints, including the allegation of sexual assault.

"It was like it was more liability management than investigation into claims," she said.

Issues have also been raised about the appeals process since it was announced last month, with National Party deputy leader Paula Bennett saying complainants had told her it was not victim-led, and sources telling the Herald they had lost faith in the party's efforts.

In a statement, Parliament Speaker Trevor Mallard said no complaint had been made to Parliamentary Service - the man's employer - by anyone involved in the case.

"I repeat my request for any individual who feels unsafe at work or when visiting to contact me or the general manager. Any further action requires a complaint," he said.

"I'm not prepared to comment on individual cases but take my responsibility to ensure the buildings are safe very seriously and am satisfied that that is occurring."